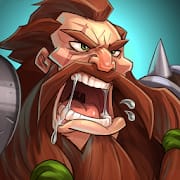 Long ago, a magical cataclysm tore the world asunder. It has been an age since those days, but even now there is only a single place standing tall: the Spire. Your home. And it is threatened.

You must fill your airship with daring Heroes, so you can go out and reclaim what was lost by your ancestors… but be wary. A second cataclysm looms on the horizon, and it will take all the might that you can muster in order to stand fast.

Collect over 400 different Heroes, each unique and powerful in their own way. Train them in battle and gather what you need to upgrade them. Ascend your Heroes to unlock new skills, revealing their full potential. Strategize carefully and build your teams with absolute precision - the right combinations of skills and abilities can devastate even the strongest foe!

March out into the ruins of the world. Defeat enemies both powerful and insidious, and seek out treasures with which you can equip your Heroes. If the stars align, you may also go to special Rifts that will test the limits of your Heroes’ abilities, but will reward you with some of the most powerful warriors in the world.

Bring your friends together into an Alliance. Fight side-by-side in cooperative dungeons, or face off in PvP duels. When you feel that you are ready, set your Alliance against two others in a three-way Alliance War, where you must claim territory and hold your ground against relentless assaults to gather precious Banners!