Everyone working at Plarium was buzzing with excitement when news broke that YouTube stars Henry and Jeannie from MxR Plays were heading over to visit us in the Ukraine. However, the pair did let slip on their arrival that it was not just their desire to meet the team behind Raid: Shadow Legends that made them head to the country alongside a host of other leading YouTube stars and influencers, including MMG.

Putting his cards on the table at the first opportunity, Henry explained candidly: "I wanted to jump out of a plane." He then added how he remained surprised that Jeannie had actually chosen to join him for the adrenaline-fueled activity.

He said: "I showed her the packet of all the details you guys put together of what we were going to do. I’m like, Jeannie look at this, there’s a cool tavern thing where everyone is going to dress up. There’s no danger in that – that's fun. So, I think she saw that, and then she was convinced, like, maybe it might be worth it."

Jeannie, however, remembers it differently. "Yeah, no, surprisingly the sky diving thing was the one you opened up with," she outlined, before adding: "but I was like, okay, you convinced me."

The playful teasing and conversations between Henry and Jeannie are undoubtedly part of what makes the couple’s chemistry on the MxR Plays channel work so well. Their presence on YouTube has taken on several forms through the years, but throughout it has always remained very successful. In fact, at the time of writing, the channel has attracted more than 900,000 subscribers, while some videos have achieved over a million views.

While the MxR Plays channel was initially based around mods for Skyrim and Fallout, the pair decided to change things up and, in their words, "tried everything". This included vlogging about events in their own lives, trying to cook food from video games like Skyrim in the real world, and doing box openings of various different items.

These days, the channel is generally based around reacting to some of the stranger, darker memes and images that have found their way onto the world wide web. But while they have been through a range of different styles of content during their time together, how did MxR Plays actually get started?

Going Back to the Beginning of MxR Plays

In their words, the couple’s "pretty long story" together begins back in 2011 when Henry created MxR Mods. A few years later, around 2014, a Skyrim mod called Recorder went on to catch his eye and left him intrigued. It subsequently emerged that the mod in question had been created by Jeannie.

"I saw her mod, and I was really fascinated. I thought her voice acting was really good. And she's one of the best followers I've ever trialed." he recalled. After that initial moment when their worlds collided, the pair’s relationship started to develop when Henry went on to undertake a Q&A with Jeannie on Snapchat. Finally, things went to a whole new level when Henry confirmed that he was heading to Los Angeles and wanted some advice about the city.

He said: "I asked who wants to show me around LA, because I just moved to LA. She was the first one to email me. And then we just shot a vlog, and then after that…"

"It hit off!" Jeannie added.

Henry finished his thought: "Then I asked her on a date."

While the pair, of course, have a long background in the world of video gaming, which is linked to Skyrim and Fallout, one of the more surprising revelations to emerge during our chat is that – bar Raid: Shadow Legends – they don’t tend to get much time to enjoy the latest titles these days.

"Only thing we don’t really do anymore is play, that’s for sure," explained Henry. "unless it’s Raid: Shadow Legends."

Jeannie added: "We don’t play – even though our name is MxR Plays."

Time for Raid to go Disney?

Speaking of Raid: Shadow Legends, during the course of our interview the couple had a few thoughts on some intriguing additions that could be made to the game via an unrelated conversation on Disney princesses.

The interaction began with us mentioning the popularity of their Disney-related videos which, in some cases, have generated more than a million views. One notable one sees their pair react to and dissect images that have been created on the premise of; what would happen if Disney princesses were 50 percent more realistic. Our question was simple – if you were a Disney princess who would you be and why?

While Jeannie was immediately excited by the question, Henry’s general lack of knowledge of the area came to the fore. He said: "Probably, probably, Little Mermaid. Is she a princess?"

"Yes, she is a princess of the sea." Jeannie added, helpfully.

Henry explained: "I want to go to Atlantis, and I can’t really swim in real life, so if I could be a little mermaid, I think literally I wouldn’t have any trouble with that."

On the flipside, Jeannie opted for the lead character from Beauty and the Beast, explaining: "I feel like if there’s a Disney princess that most represents me, it’s Belle, because she reads books all the time and she's all about knowledge."

Asked which of the princesses they would add to Raid, Henry was quick to answer with "the one with the dwarves."

He then added: "Snow White, because she can then command all the dwarfs to do her bidding. Can you imagine that? You can literally summon like seven dwarves to kick everyone’s ass. Those bosses with their three sidekicks don't stand a chance against seven dwarves."

The logic of the answer clearly took Jeannie back ever so slightly, as she added: "Oh, that’s actually pretty smart." 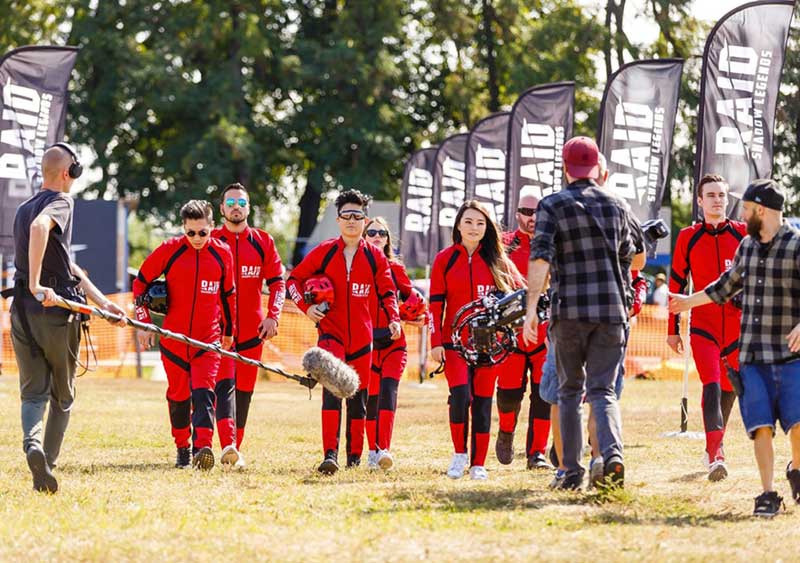 Making Time for Each Other

As we have already touched upon, one element that certainly makes Jeannie and Henry’s YouTube channel more intriguing is the fact that they are an actual item in real life. During our chat together, this, of course, begged the question – after spending hours filming their video content for the channel, do they actually find the time to do normal couple stuff and have time together away from the camera?

Jeannie explained that, in the past, it was all about making the most of short periods together, explaining: "We would only see each other for the weekend, like only twice a week, but during those two times… actually, I would only film with him for maybe four hours or so, and then the rest of the day we spend like making dinner, going out, exploring."

Henry added that the fact that they now live together has changed the dynamic: "She recently moved in though, so now we have all the time in the world, but prior… yeah, it was pretty tough. But we got through it. I think it's because we also enjoy our recording times. We just try and make time for us. That’s important."

Words of Advice from MxR Plays

Following that question, it also seemed like there was only one way to round off our interview in general. With YouTube proving to be such a popular platform and so many young people, in particular, looking to get into the world of content creation, what advice do Henry and Jeannie have for those who are seriously looking to get started within that world?

Fun seems to be a vital component, as Henry was very quick off the mark to state that a key aspect of making videos is to not try and take it too seriously. He built on that comment by reflecting on his own outlook in the past, adding: "I used to do this in the beginning, I would sometimes criticize Jeannie, like, oh maybe you should try and say it this way, or try and be more like this.

"But I realized, like, just relax. Just enjoy your time. Just have fun. Don't get too technical. Don’t be too serious, because if there’s any kind of bad vibe in there, it really shows in the video, and then it just ruins the whole thing. So it’s like... just don’t think about it."

Considering the huge success that these two have been able to enjoy by simply being natural on their much-loved YouTube channel, that undoubtedly seems like a good piece of advice to live by.