From the moment you open up The SlingShot Channel on YouTube, you get a sense that it isn’t any regular corner of the internet.

The welcome video’s raging riffs and array of weaponry immediately signal that on this channel, you won't just get another YouTuber staring down a camera as they discuss video games or the latest goings-on in their lives. Nope, SlingShot has a devotion to dealing with four simple things: inventions, reviews, stunts and destruction.

It is certainly an action-packed channel with a unique sense of style, but all of that makes complete sense when you consider that the man behind its success is far from your "normal" YouTuber.

One thing that immediately becomes apparent when you watch a couple of SlingShot videos (aka JoergSprave videos) is that the channel’s founder Joerg Sprave is clearly having a ball. Now in his 50s, he breaks the mould when it comes to the regular stereotype of YouTubers being from the younger generations. Perhaps even more intriguingly, he left a role at a large corporation which created video editing software in order to chase success on the platform – and it is fair to say he has achieved it.

At the time of writing, The SlingShot Channel has in the region of 2.5 million subscribers, with people from across the globe checking out Joerg’s latest incredible inventions and extreme range of stunts. The viewing figures are simply incredible, with his most-watched piece on Katana swords racking up more than 17 million views and a piece on throwing playing cards being watched by around 10 million people.

Furthermore, the channel also enjoyed some viral success and major headlines thanks to a video in which Joerg responded to the Bill & Melinda Gates Foundation Condom Challenge. The initiative is all about improving and boosting the use of condoms, so the SlingShot Channel thought it would lend a hand by creating a slingshot designed specifically for applying the items. The number of views achieved by the video featuring the impressive – if painful-looking – device? Only around 6.5 million.

Sitting down to speak to us, Joerg is quick to make a little disclaimer about his work and the risks that are involved, explaining: “The things that I do are usually very dangerous, and not safe. And nobody should do it at home, but I enjoy it and my fans enjoy it too, fortunately.”

When you are deep in conversation with Joerg, it is clear he cannot hide the love that he has for the work he does on the channel. However, he is also candid during our interview about the lifestyle changes he has gone through since embracing it as a full-time venture.

He says: “I used to make a lot of money being in a vice president position at a big corporation. Going back to being self-employed was a major step, just walking away from such an income isn't easy, but I think it was really good changing because now my day is completely different.

“I no longer have to wear a suit and tie just because I work for a German company, that's how you’re supposed to show up.”

While he has admittedly ditched the suit for the most part, Joerg has got it back out of the wardrobe recently for a couple of videos related to another YouTube venture he is now involved in. He has been able to call on his years of business experience to become the driving force behind the YouTubers Union, which last year launched a joint initiative known as FairTube with the German union IG Metall. The aim? To boost fairness and transparency for content creators using the site.

While we didn’t get a chance to talk to him about the issue, it is a very intriguing project which has suggested a range of proposals designed to provide more support to those using YouTube. These include calls for all categories and decision criteria that affect monetisation and views of videos to be published, as well as clearer explanations on individual decisions made related to the advertiser-friendly content guidelines. The initiative is also calling for YouTubers to have an actual go-to contact that is qualified to explain and discuss issues with them.

Considering he has the day-to-day running of his channel and the battle for YouTuber rights to think about, it is maybe unsurprising when Joerg mentions that he does not have too much time to embrace his long-standing love of video games at the moment. However, while we know he is a big fan of Raid: Shadow Legends, what other titles has he been playing when the opportunity arises?

He outlines: “I play a few other RPGs a lot. So that was fun, I did that too. And every now and then, I like to play card games just like poker games and so on. But as I said, not very often because of lack of time.”

Time to sit down and enjoy some gaming may be in short supply, but that didn’t stop Joerg from visiting Gamescom shortly before our interview. As he talks about his “overwhelming experience” at the event, it quickly becomes clear just how his success goes on to affect his life when he is out and about in public.

“The amount of money game companies spent on their booths there is mind-blowing. And of course, it took me forever to go from one end of the show to the other one, because I'm not sure how many people wanted to take a selfie with me,” he recalls.

“As soon as I started to give someone a selfie, you know like the line would form up and I would be trapped in there for maybe 20 minutes. I enjoyed it but I was also very exhausted.” 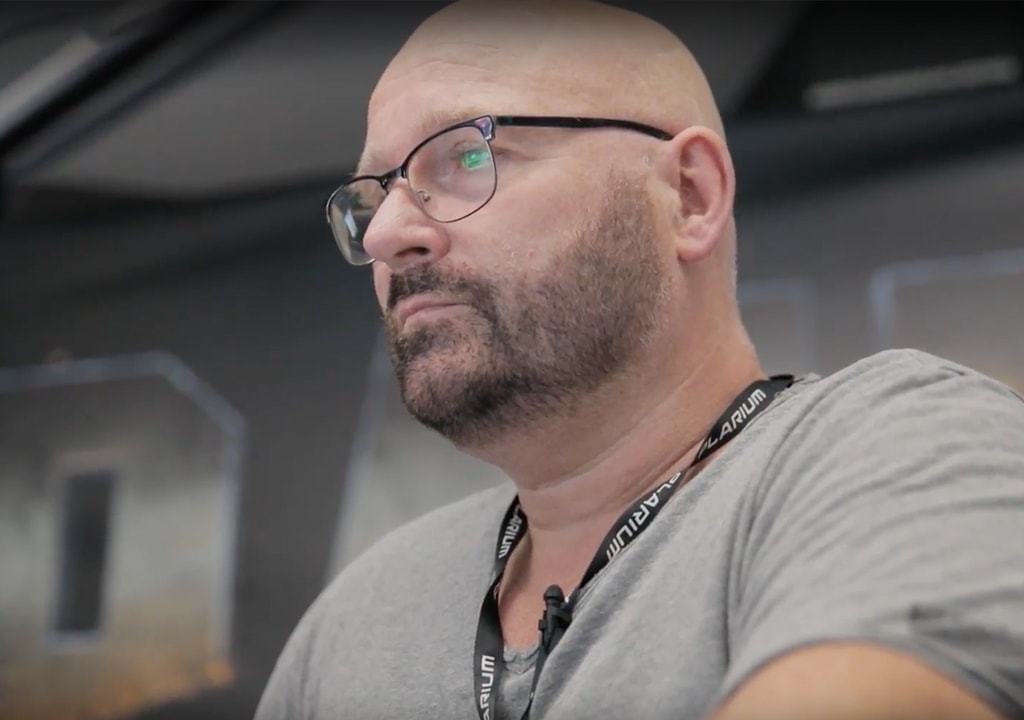 But while the SlingShot Channel has seemingly absorbed his time and also left Sprave facing the tiring tasks which are associated with celebrity status, he remains happy and grateful for everything that has happened following his massive YouTube success.

Furthermore, he unsurprisingly mentions weaponry when talking about the sense of freedom he enjoys, outlining: “I'm my own boss, I can do what I want, and I can just wake up in the morning, if I feel like building another crossbow, I will build another crossbow.”

He adds that he views his career as “the life of an artist”, explaining: “As an artist, your income is very unstable, you have really good months and you have really bad months and everything in between. I know it is the best move I’ve ever made and I’m very grateful for the opportunity that I could turn into an artist after so many years being a professional manager.”

He is certainly making the most of it and it will be fascinating to see where Joerg’s unconventional journey takes him next!