The Future of VR MMO Gaming and Beyond

Virtual reality (VR) has gone from an embryonic idea to a fledgling group of products. Although VR gaming was worth $1.1 billion in 2020, this is just the start. Analysts expect the market to be worth $2.4 billion by 2024, which means the industry has only scratched the surface of what’s possible.

Naturally, it’s hard to predict the future of VR, but it's possible to make some educated guesses based on the current state of play.

Hardware and headsets will continue to improve, that’s obvious. However, the thing that is less clear is where VR software will go. One area that’s emerged in recent years is VR MMO, aka Virtual Reality Massively Multiplayer Online Role Play Game, or VRMMORPG.

Before the potential of VR MMO is explored, it is essential to first take stock of the industry and its potential.

Virtual reality is not limited to headsets and optical devices. After all, “VR” means that elements of reality, with physical features, are used in real-time within a computer-generated world. For that reason, VR technology should not only be visually engaging but will ideally also involve movement or speech.

A whole variety of technologies can be used to make this possible. Stereo projection, optical tracking systems, and force feedback are just a small selection of the technologies developers are making use of.

As these are gradually becoming more refined, virtual reality reaches players more readily, becoming ever more impressive and versatile. This, in turn, can help the creation of more complex and engaging VR MMO games.

Despite having received a lot of attention upon its release, the VR headset’s popularity was ultimately rather limited. Virtual reality via wearable headsets was copied extensively, even before Oculus launched its pioneering model. The relatively high price certainly didn’t help and put off many potential consumers.

In spite of this, VR headsets are impressive. They let players experience game worlds up close and in a radically different way. The headsets feature an extremely wide field of vision, which gives the player the sensation that they themselves have become part of the virtual world.

Turning your head when wearing VR headsets, you automatically find yourself looking around the game world. It’s a great invention that opens up a completely new world of gaming - except for the fact that it’s still pretty pricey (VR headsets for mobile devices are cheaper, but also significantly less powerful). 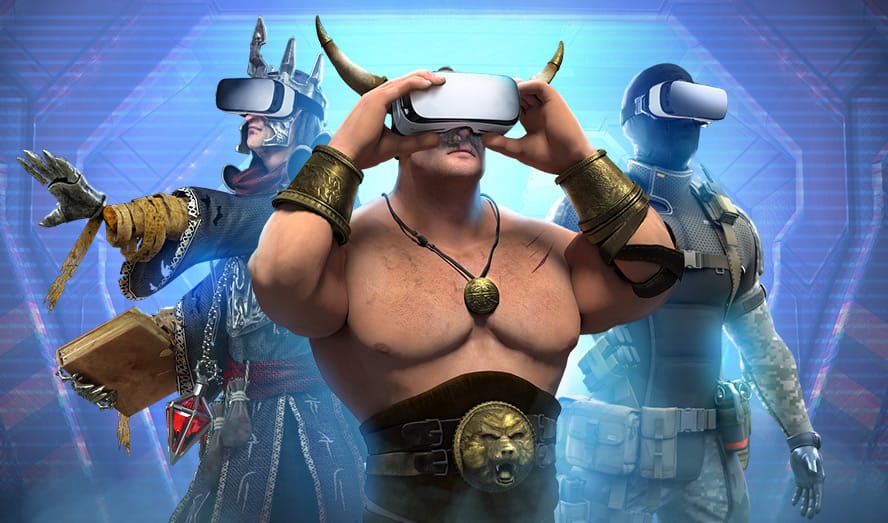 Headsets for VR MMO and Other Virtual Worlds

Alternatives to the high-performance Oculus Rift model include, for example, the HTC Vive and the PS VR - although the latter is only compatible with PlayStation 4.

The Oculus Rift is equipped with “touch” controllers, which allow the additional use of joysticks and keyboards as well as game control via gestures. Meanwhile, the HTC Vive offers considerably more accessories; a headset, a controller base station, and a tracker can be purchased separately.

Another model is the Sulon VR headsets, however, they never gained widespread popularity. Other manufacturers include Durovis, Avegant, and Gameface, though many of these companies’ products are only available for the mobile market.

Even before VR headsets were launched, devices such as Kinect had been elevating game control to a new level. This technology was the first that allowed players to control games via movements - in particular, hand gestures. This opened up completely new ways of gaming and truly changed gameplay in many homes.

Nintendo’s Wii also utilized this type of gaming control. It made it possible to create a whole new game experience when playing tennis, bowling, or even boxing, as the optical controls required the correct movements, rather than just the push of a button. In combination with this kind of motion control, VR headsets create the perfect conditions for a type of virtual reality that can be experienced by engaging the human sensory and motor systems.

The State of Play: Moving Towards VR MMO Technology

Now VR headsets and motion control for games have been covered, it's time to take a deeper look into the future of VR technology. Ideally, to create the strongest effect, virtual reality should engage all the human senses.

So far, VR headsets, which engage the eyes, and a few motion-controlled systems that use gestures and a selection of movement patterns are the only available options.

But what would virtual reality be like if it engaged the whole body and all senses? Cyberith is trying to make this happen with its Virtualizer. For this VR technology, the gamer is strapped into a frame. In this frame, they can jump, duck, walk and even run. All this is possible in 360 degrees.

When you are walking within the frame, you are also moving inside the game.

Sensors can project movement with a game weapon, instead of the player having to use a more traditional controller. This way, the game is controlled with a whole range of movements, including aiming and pulling the trigger. VR headsets support this device and make for an even more realistic version of virtual reality. 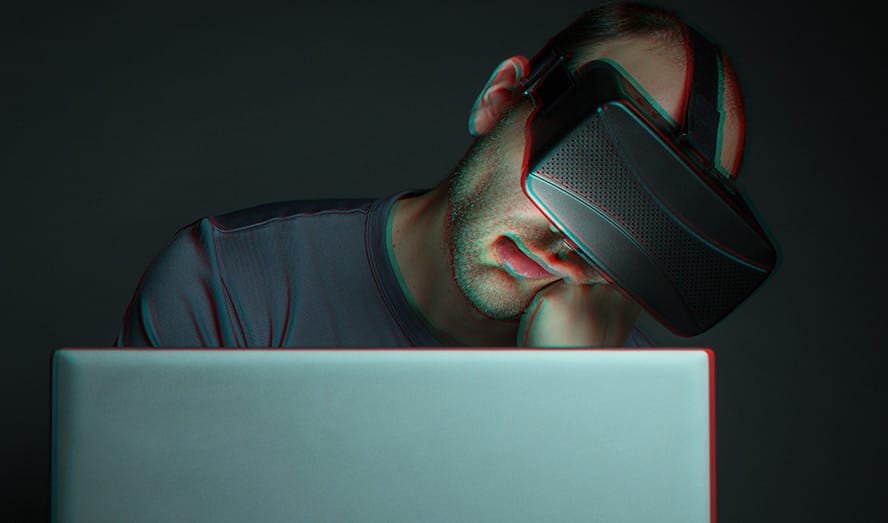 The future of VR gaming is going to evolve, in some part, to suit the demands of MMO gamers. In simple terms, VR MMO games are 360-degree versions of traditional MMO and MMORPG hits. That means players can explore rich, multifaceted worlds alongside other players in real-time in the form of VRMMORPG gaming.

This ability to link two or more VR players in a single setting has already been demonstrated by various sports games, most notably table tennis (see video below).

From this, it was only a small step to building VR MMO worlds filled with hundreds, if not thousands, of players. To ensure VRMMORPG games can function in a way that players know and love, certain additional pieces of software have been developed.

It’s important to note that NerveGear et al aren’t real, yet. In other words, you enter a game using a standard VR headset and play. Then, inside the game, there are add-ons such as NerveGear that contribute to the VR MMO experience of your character.

But, as is often the case, life mirrors art and there are Japanese companies that are actually making NerveGear headsets. These will be based on the in-game product and create more immersive VRMMORPG gaming experiences. 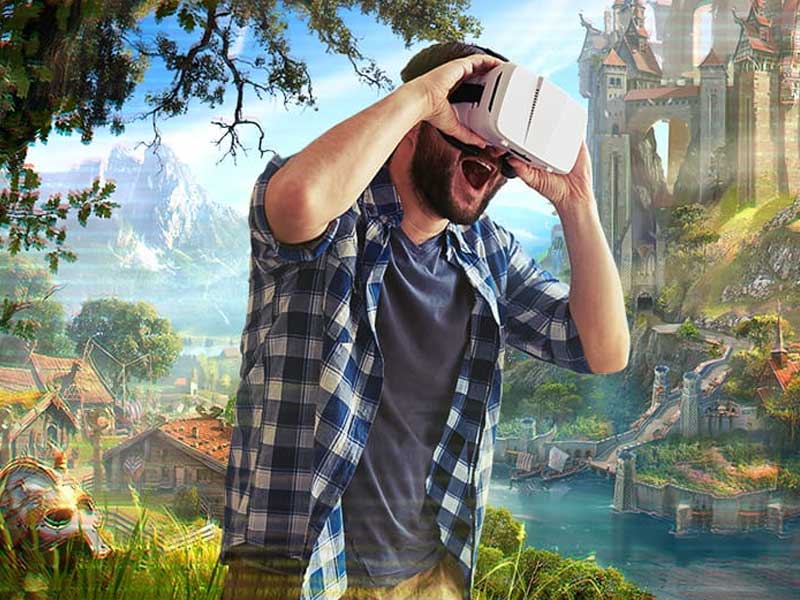 VR MMO and The Future of VR Gaming

So, will gamers of the future be able to play and experience games entirely by moving their body? The answer is yes! Obviously, the main question - that of cost - remains. It will be interesting to see to what extent, in the future, VR be expanded to interact with other human senses. It would be fascinating to touch, smell, and even taste what is experienced in games, particularly the VR MMO variety.

FeelReal has started to make inroads in this area. These developers are working on two products, the FeelReal VR as well as the Nirvana VR. The FeelReal VR is wireless and compatible with most VR headsets. It can trigger sensations of wind, vibrations, water mist, hot air, and much more.

Furthermore, the device can emit seven different smells. The Nirvana VR is a mask that covers the entire face, which adds further to the range of sensory stimuli.

Other VR technologies include, for example, the VR Dome and the VR Cave, which make use of an entire room to create a virtual reality environment. Then there are efforts to turn in-game VR MMO ideas into a reality with products such as NerveGear. 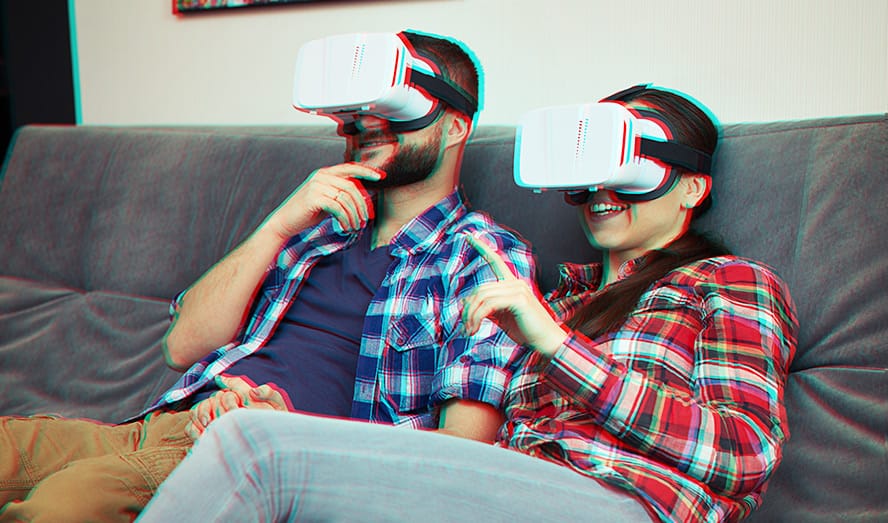 Living and Playing in a Virtual Reality

Therefore, what is certain is that the future of VR gaming is not only bright but infinitely more immersive than it already is. Hardware will allow gamers to feel more sensations as they play. This, in turn, means that developers can create richer environments.

For VR MMO fans, that’s great news. However, it’s also great news for anyone that wants to lose themselves in a world of virtual entertainment.

Raid: Shadow Legends
Collect 400+ Champions & Fight For Glory
Read more
See all
Future Genres & Types of MMOs
What Is an MMO, What Is an MMORPG and the Difference Between Them
The Best New Year's Video Games To Welcome 2023
Connection lost