Learn How To Create A Fantastic Game Setting

The overwhelming majority of information we process is done visually. In fact, experts put that figure as high as 90%. Our short-term memories are only capable of holding between 5-9 objects simultaneously and thanks to Twitter, news is often delivered in a format that is limited to a relatively low number of characters. 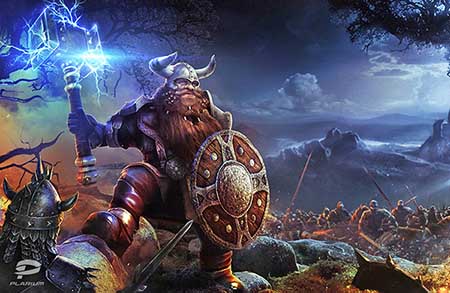 This is a good indicator of how easy it is for us to become bored with visual stimuli. If something doesn't captivate our attention from the get-go, chances are we’ll quickly lose interest. The gaming industry also faces tough challenges as it attempts to enthrall players and retain them as loyal patrons. Consider for a moment that the biggest names in the gaming world struggle with this every single day – then imagine how hard it is for small gaming companies trying to make a name for themselves.

We will demonstrate how a balanced setting can greatly assist when it comes to player retention, interaction and enjoyment in the game. We’ll start by taking you back to where it all begins – a white canvas!

Simply put, the setting is the environment where the action takes place in a game. There are all sorts of settings out there, and you're probably familiar with many of them. These include art deco, post-apocalyptic, sci-fi, fantasy, battlefield, etc. You can gather a lot of information about the game from its setting.

Let’s consider several games and the settings they use to create the right atmosphere: Mass Effect and Star Trek are sci-fi games of note; Neverwinter Nights is a fantasy-laden game, and Fallout takes place in a post-apocalyptic world. That having been said, it's not always cut and dry with different games.

Games' Settings are not Necessarily Either One or the Other

Sometimes there is so much going on in the game that the setting needs to use multiple elements to create the ideal environment. Consider the differences between dieselpunk and steampunk – both stem from the early 19th century and they both refer to the era when steam engines reigned supreme.

However dieselpunk is more modern and it extols the virtues of the progress being made with diesel technology. Dieselpunk as a genre was heavily influenced by the period between World War II and the mid-1950s, with plenty of emphasis on future-oriented technology.

Gaming developers utilize setting to maximum effect. It's about so much more than the time and place where the action unfolds; a good setting involves myriad factors that create the laws of the fictional world where the game characters interact with players.

The goal is to create the ultimate gaming universe – a place where players are engaged and rewarded with stellar gameplay.

Mihaly Csikszentmihalyi, the world-famous psychology professor of Claremont Graduate University, was perhaps the first notable authority to define flow. In fact, he was so enamored by the concept of flow that he called it the secret to happiness. To him, flow is about ongoing satisfaction in activities – a state of immersion and heightened focus in all facets of life.

In the gaming universe, this is achieved when all your skills are applied to solve challenges. There are multiple components to the state of flow, of which the setting is certainly one of the most important. The goal at all times is to bring players into the gaming arena and blur the lines between the gaming world and the real world. This results in immersion, integration and oneness with the gaming universe. Real-world constraints such as time, space and gravity melt away.

How Choice Weighs In On Game Seetings

When gaming developers don't pay sufficient attention to things like target marketing, engaging plot lines or the game’s setting, problems arise. This leads to many mistakes, including the following:

The problem with the first example is that there is a mismatch between reality and the images created. As a case in point, Demolition Lander featured a massive scope and a space setting, but the graphics were too underdeveloped and the mechanics failed to do justice to such a large-scale universe. As a result, this Kickstarter game didn’t hit its targets.

Settings that are haphazardly applied to really interesting games can also ruin the experience for players. Mirror’s Edge features incredible graphics and animation and top-notch mechanics. The poor quality game world and an uninspiring script don't do justice to this game. As a result of negative feedback by critics and players alike, the flow of the game was severely hampered. This was evident during the story campaign where players found it difficult to immerse themselves in the futuristic city.

At the beginning of a game's development, the setting must be chosen. During the game planning stage, things like the payment system, gaming platform, in-game mechanics and other aspects must be factored into the equation. Together, these aspects will determine which type of players will be attracted to the game.

Extensive market research needs to be conducted in advance so that the game is well received by its audience. Of course, if it were possible, the best thing to do would be to take a control group of players and see precisely what would satisfy their gaming preferences, and then build a game around that.

With the direction established, setting takes center stage. At this point, it's necessary to conduct extensive market research – trends, market analysis, target audience needs etc. Based on the outcomes of the research, implementing a plan of action regarding setting, mechanics and other aspects of upcoming games, should start.

The Importance of Text

Some games do a fantastic job of telling a story without displaying any text. However, in spite of the advancements in graphics technology, text is still incredibly useful for gaming purposes. MUD gaming developers used text to bring players into a state of continual engagement, excitement and contentment – flow. As a result, most of the player base was generated through player referrals.

Other games that use text to great effect include Sword & Sorcery and Fallout. Without any real hardware required to run those games, players could use their own creative flair to imagine the most fantastic game settings in the universe.

Social gaming is all about immersion. The ideal setting needs to be created, with a careful balance between text and visuals, to reel in players and keep them entertained at all times. The combined effect of text and visuals must grab the player’s attention from the moment they register, and keep them coming back for more, day after day.

Game lore is an integral component of all good strategy-based games. The lore includes elements such as economics, social order, mythology, religious components, and other idiosyncrasies that are innate components of the game setting. By creating a rich culture within a game, greater consistency and focus can be achieved. This makes it possible to update the game accordingly. The type of text that is added in to a game is not meant for window dressing purposes only. It is meant to add thematic value to the game.

Several different types of text occur in a game, ranging from standard literary texts to technical texts. The latter refers to things like updates on interface elements, news and in-game manuals. In a pirate game, for example, you would be better served with ‘Argh! Step aboard me ol’ galley and rain fire on …’ than the simple ‘Welcome aboard!’. The diction used must suit the theme and flavor of the game to create the ultimate immersive experience.

This goes to the very core of setting the scene, blurring the lines between fact and fantasy effectively and creating an unforgettable experience. No stone should be left unturned when it comes to the setting. This applies to technical support, e-mails, forum posts and social networks, too.

Players expect all aspects of the game to be true to the game’s very essence. One slip-up is all it takes to shatter expectations and jerk a player out of the state of flow, and that's why game developers eat and sleep the games they create.

These types of texts keep things lively by engaging players on multiple fronts. The idea is to create a setting that transcends the boundaries of the game and appeals to players in other aspects of their daily lives. It all comes back to the concept of flow – the sum total of all the components of the game must create a more meaningful, rewarding and immersive experience for the players.

Take a look at this letter, written by an enigmatic lady named Voronika to fans of Pathogenic. This was launched on the eve of their campaign on Kickstarter.

It is not uncommon for game developers to go the whole 9 yards when creating a game universe. Some developers go so far as to create fictional corporations from their game universe, open up offices on their behalf or even establish multiple websites as part of their advertising campaign.

As you can see, the setting of a game is crucial to the game’s authenticity and integrity. This is an all-encompassing undertaking that covers everything from text to video, the user interface, graphics, and music and lyrics. The idea is to take all these individual components and assemble them to create a whole that is much greater than the sum of its parts.

Scary Games That Are Slaying 2022
Understanding the NFT Gaming Craze
How to CRUSH This Towel Day
The Rise and Fall of OUYA, the $8.6m Kickstarter Dar...
Game of the Year Greats: In Search of Gaming’s Hits ...