Want to Get Better at Strategy Games? Join the Military!

ATTENTION! Fall in line recruit and stand up straight. This isn't a game!

OK, we might actually be talking about games, but if you want to become a better Strategy and MMO player you need to take things seriously. How seriously? How about joining the army?

Getting Better at Games by Fighting a Virtual War

Whatever battle you engage in, whether it's a medieval showdown i or a futuristic fight, war games require some serious thought.

In fact, there is mounting evidence that military training can not only help people achieve success in war games but that war games offer a form of therapy to those with PTSD. 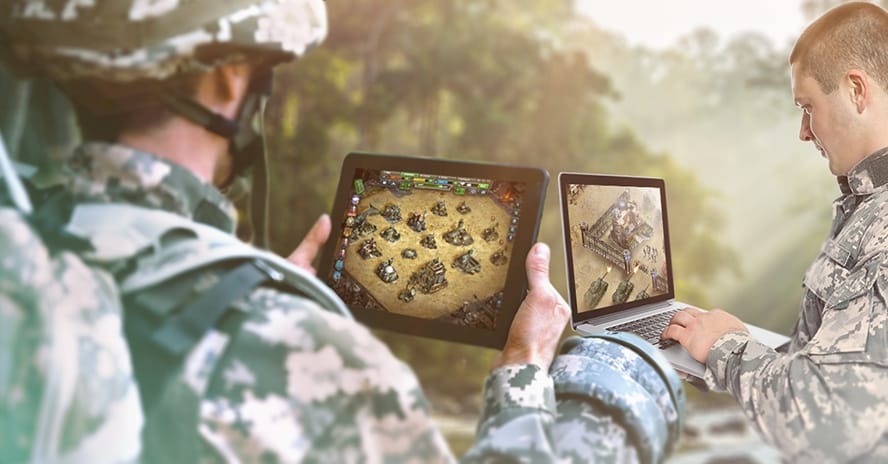 According to former US platoon leader Bryant Chambers, war games provide the "same operate conditioning" as a real battle scenario. Although he adds the caveat that games can't truly recreate the emotions of battle, he suggests that the stimuli and response mechanisms are similar. From this, Chambers has found that games allow ex-military personnel to satisfy the "cognitive and behavioral" responses they've been conditioned to think and feel.

However, they can deal with these ingrained behaviors of war without having to deal with the real emotions of conflict.

In this respect, games can be an outlet for veterans. For our purposes, that shows the common links between real war and virtual war. Indeed, it's hardly surprising that those from a military background enjoy gaming and, moreover, have a knack for it.

Naturally, you can't just spend a few weeks training with a military unit and then go AWOL to satisfy your gaming urges. However, if you learn to think like a veteran and use the skills of a military mind, you can become a better game player inside our virtual worlds.

Before you can fall in line, stand to attention, and embrace the mindset of the military, you first need to leave your assumptions at the door. In many respects, a soldier has to be extremely rigid in the way they operate in battle. Sticking to their post and following a set strategy is crucial, but the overall way of thinking about war is not and cannot be rigid.

As Sun Tzu teaches us in the Art of War, "blindly following a set of doctrines, something an infantry soldier may be programmed to do, does not engage with the art of war, it does not win the battle. To become a leader, someone capable of leading an army to victory, you have to adapt."

Only by taking a set of established rules, and then melding them to fit the situation, can you hope to thrive in battle. As Bruce Lee famously put it, a greater fighter is not one that lives by a fixed set of moves but one that learns to "absorb what is useful, discard what is useless, and add what is specifically [their] own."

Essentially, while it may seem like a military mindset sits in contrast to the traditional assumption that gamers are "creative", the reality is rather different.

Get Better at Strategy Games by Adapting to Change

Let's assume you've been thrust into virtual battle, and it's up to you to lead an army to victory. Although there are certain "strategies" that might work, you still need to ebb with the flow of the game. This is something Navy SEALs understand better than most. As Navy SEAL Commander Shawn Parr has said, "survival is not about who's the strongest or fastest but who can best adapt to change."

Being a master of adaptation is something a SEAL must master and, moreover, a trait you should develop as well. Yes, while it might be a good idea to send your units to the Catacombs and only use them to defend the castle when you suspect trouble is on the way, this isn't a hard and fast rule. What if you can't see a potential attack coming? What if you have to fight on multiple fronts? There are going to be times when it's best to leave some units at the castle and it's your job to ascertain when these times are.

Everything Starts With a Plan

Beyond the art of adaptation, the idea of communication is crucial in a war situation. If you were to become a SEAL, one of the first battle lessons you'd learn is that you should always try to ambush the enemy and disable their radioman. In doing this, you'll not only sever the line of communication from the base to the field but, in most scenarios, take out a unit's leader. This strategy takes us back to the idea that a military mind is not a set of predefined moves.

When you take out the person in charge of devising a plan and adapting to the situation, you effectively disable an entire unit. Soldiers on the ground are pushed into fixed patterns and can only deviate when given the command. Based on this, if you eliminate the "brain" of the operation, the body (i.e. the soldiers on the ground) will stop. Why? Because those on the frontline are zoned in on a single task and don't have the ability to zoom out, take a broad view of the situation, and adapt accordingly. 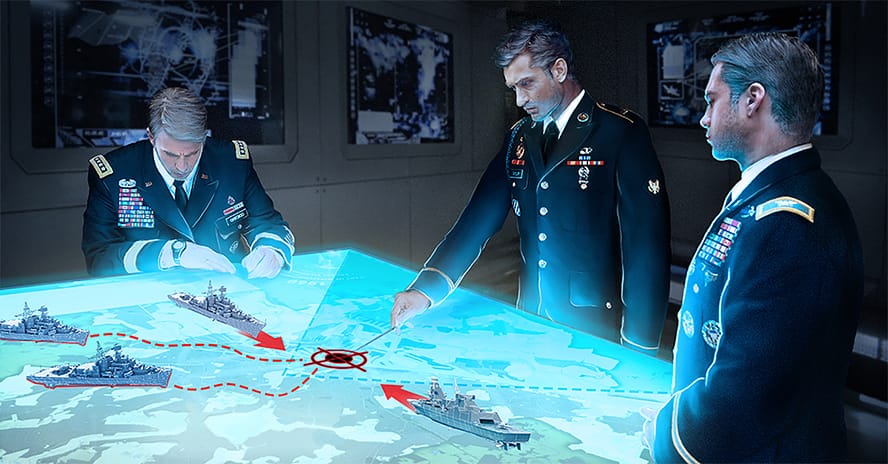 Again, this is something you should remember when you're playing war games. Just as you have to be able to adapt your own strategies, you need to find a way to disable the enemy's ability to do the same. Follow the chain of command and take out the mouthpiece at the top and, in turn, you'll render your opponent virtually powerless.

Think Before You Act

Perhaps the most important lesson we can learn from the military is the idea that you should think before you act. Although a phrase now used in the common parlance of parents and teachers, the saying actually has a strong connection to military theory. According to English soldier and military theorist Sir Basil Henry Liddell Hart, those with the most influence spend time pondering their thoughts rather than making rash decisions.

"A life spent in sowing a few grains of fruitful thought is a life spent more effectively than in hasty action that produces a crop of weeds. That leads us to see the difference, truly a vital difference, between influence and power." - B.H. Liddell

Making a 'power' move based solely on your rank isn't conducive to becoming an effective leader in the military. Only through careful thought and planning can you hope to make successful moves and, in doing so, win the trust of your troops. Commanding someone to do something often leads them to the question "why" and, if you can't provide a solid answer, no one will listen.

If we extrapolate this to our world of MMO games, we know that communicating with players around you is crucial. However, even before you start to talk, you need to plan your own strategy. Consider the size of your army, the expanse of your base, where your allies are, and the location of your enemies. Only by thinking through every variable can you devise the most effective strategy - a strategy you can then disseminate through your network of allies. When it comes down to it, the idea that success in war is a product of rigid thinking and blindly following a set of predefined "moves" is flawed. 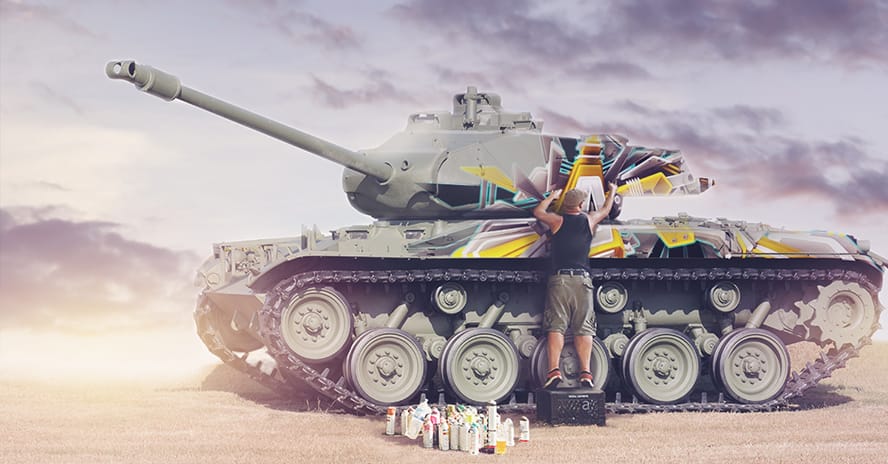 Embrace the Art and Science of War

Although there are skills you need to know in order to avoid certain death, Tzu was 50% correct when he described the act of war as an "art". Once you have the tools of the trade, you then need to paint a picture to suit your surroundings. It may be somewhat clichéd to see war as one part science and one part art but this is the way a skilled military mind will view the situation. This way of thinking is one you, as a strategy games player, must also adopt if you want to triumph.

If you want to become a strategy games general, you need to join the military. Even if you only sign-up metaphorically and take on the basic tenets of being a soldier, there are a ton of benefits to thinking like a veteran of war.

Flexibility is Key to Improve in Games

While there is a certain rigidity to serving on the frontline, a true military expert knows that this is only one facet of a much broader mindset. Flexibility, communication, and having the ability to think through each specific situation are the only ways to thrive in a battle situation.

If you can think this way and, as Bruce Lee said, fuse your own skills with only that which is useful, success in the virtual theatre of conflict can be yours.

Raid: Shadow Legends
Collect 400+ Champions & Fight For Glory
Read more
See all
Insights
Competition, Cooperation, and the Reality of Toxic Gaming
Insights
Want to Be an MMO Clan Leader? Here's How
Insights
War Games: Why Do We Love Playing at War
Connection lost