G'day Ladies and Gents, Boys and Girls. My ID is BloodyRipper and I am the Chief of the clan [JtV] Journey to Valhalla.

Now I'm a Microsoft Fanboy so to speak, and for this game their is no app for the Windows 10 Mobile, Rather sad, I know.

But my better half and Love of my life is an Apple Fan Girl, for months and months she rubbished me how i could not join in and play this game (7 months to be exact). Until the day i found out i could play this on a Windows 10 PC, using the browser. Well then i just had to join, but by this point she had become the Chief of the Clan HRSOS in the Kingdom of Solrek, and ruler of the Kingdom. And when i joined she said i could not join her clan on the fact I would not do as I'm told. Well thats it then, i said. I'll Start my own clan, and in 3 weeks My clan has 100,000,000 influence and 10 Members. woohoo.. We (our mighty clan full of awsome Vikings) are set to take over the Kingdom.

Well we just finished a KvK comp, and our Kingdom did well.

At one point I created another ID in their Kingdom and took over their "Place of Power", i thought was funny. I will post a pic as i took a screen shot, just got to work out how to do it.

1
Hi I am new to this game a kid from philippines, maybe I can join your kingdom? my game name is Vrendini

Well an interesting turn of events, Had a bit of a blew so to speak with OMNI Clan, My account got Zero'd during a kvk, i reacted to Omni and started tile hitting them, they asked me to stop and said they do not tile hit and they would not react, So i thought i'd put this too the test, so last night before bed i put some troops on a tile right on the OMNI scronghold boreder, and when i logged on this morning in my reports, An Omni Tile hit,

Well its me again, been some time since my last post. The JtV clan is doing well, we have a stronghold now, and already built 6 of the buildings of the 8 buildings.. Not including The house Jarls as it comes with the stronghold. We are undefeted in our CVC battles and all our winnings i have been putting toward the growth of the clan. We are currently at war with only one clan in our Kingdom [Terror] as they continue tile hits on us, we will continue return fire. Was almost at war with [RUFAM] but turns out we had a member in our clan for a short time who attacked their clan and not sure who fired first. So i'll let sleeping dogs lie with that at the mo. I finally set up the Line APP as most people in this game like to use it, helps with exchanging screen shots and sorting out issues. For those who want to add me my LINE APP ID IS: bloodyripper_au

My own ID growth has slowed due to all ive been putting into Growing the clan and the Stronghold and making sure we win our CVC battles.

Did make one big stuff up. I bought a pack that wasnt discounted... Now i will have to wait a few weeks for prices to come down. This will put some strain on our CVC battles..

Well anyways, thats enough for now, feel free to comment in this fourm, Dont be shy....

oops i almost forgot, i Became Konung of Solrek, for all of 10 seconds..lol...

was about a week ago.. 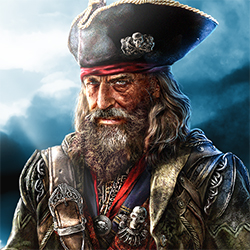 19.02.17
8
We had some bad luck last CVC, we lost.. Score was like 8b to 13b, wasn't happy. Might take us a few weeks to get back on our feet. But as they say "you can't win them all." But we only have the Arms Guild to build in the stronghold now and will take a bit to get the RSS to build it.

Well its been a few weeks since my last post, so i thought i better post something, well after our loss in my past post, we had a good comeback and had a good win in the following CVC, But this week we had a loss again. I had a fault with the game when CVC started and it would not let me purchase any packs. By time Plarium had fix my issue CVC was already half over and the pack i normally get for CVC was no longer available. I was spitting chips...(putting it nicely), Plus our opponent constructed another building in the stronghold the score turned out to be 2.5b to 4.3b. The one big problem we got is we are a young clan with few members. But our Influence is high due to us have already built just about everything in the stronghold. So the game sets us with opponents who have high influence but who have not built much but are looking to build stronghold buildings.

What we need id to recruit more higher influence members or increase our own to put us on par with clans who have already built everything.

Also in JtV headlines, We are at war with the clan OMNI. During last KVK, one of their members spotted me hopping around our opponent kingdom attacking their clans and took the opportunity. to attack me while i was scouting the opposing Kingdom. I took it as a low act (We are supposed to be all working towards winning the KVK for our Kingdom). So war has been declared the OMNI clan (Tile Hits Included).  Tryed talking to their Chief, but he doesn't care how his clan members behave. But calmer did come to the player who hit me, He tried to hit a 70m influence player and lost, He was 620m influence at the time. Even got a copy of the report. During that KVK i also took the opportunity to take over their POP.

Well we just finished a KvK comp, and our Kingdom did well.

At one point I created another ID in their Kingdom and took over their "Place of Power", i thought was funny. I will post a pic as i took a screen shot, just got to work out how to do it.

Well our Kingdom is winning rKVK this time round. But HRSOS let a few of us smaller clans have friendly battles over POP,  I decided to have a go. SUCOH was in pop and i did post in common i was going to have a go for it and i did see they mad a few players send in reinforcements. I posted in common "This is going to hurt", but i was thinking the hurt was going to be felt by me. But i won. I feel bad for one of their members [-Rhyno-] who was in there at the time as his influence was only 30m, the other two players in there knew what they were getting them self's into. If you read this Rhyno, let me know if you need anything i will try and do my best to help you.

Well after our little battles, i retained POP for 5 and 1/2 hours, then Chicky chief of HRSOS who is also my other half in the real world tricked me into changing a DVD and retook POP while i was doing it. i was pissed..lol...

Anyways,,, thats enough for now.. I should post again after next CVC..