A warrior without peer and a shining example of chivalry, he who would go down in legend as Septimus the Giantslayer was born into the courts of Kaerok Castle. His childhood was a turbulent one, for the Kingdom suffered greatly when the servants of Siroth unleashed their Undead armies upon Kaerok as part of the Dark One’s plan of bringing Teleria to heel once and for all. It took the intervention of the Arbiter and countless Champions whom she had gathered over the millenia to turn the tide; but while the mad Necromancer Lords and their deathless minions were laid low, Kaerok lay in ruins. The King had perished with no heir to take his place - an event that led to a bloody civil war, one of many in Kaerok’s history, for the right to don the crown.

Many pretenders laid claim to the throne while Septimus matured, yet none of them could hold it for long. The terrible schism among the Banner Lords of Kaerok grew ever wider with each passing year as Knights and nobles looked to their fiefdoms first and foremost at the cost of everything else. And while the fate of the entire Kingdom hung in the balance, vultures circled, drawn in by the promise of easy prey.

The domain of his sovereign, Duke Gilles of Vaure, lay to the north-east of Kaerok castle, close to the mountain range of ---. There, vicious tribes of ogryn and trolls dwelt, driven into exile by the nascent Kingdom of Kaerok centuries ago. Now, with the Banner Lords divided, these monsters smelled weakness like never before and surged forth in search of bloody vengeance. These were no mere raids that had become normality for the Knights of the frontier, this was a war of subjugation and destruction. To lose would be to let savage creatures take over vast swathes of land and threaten the seat of the King itself.

Septimus first saw battle when he was only a boy of seventeen. His Lord’s retinue was ambushed by a large troll raiding party while travelling to parlay with one of the neighboring Barons. Overcome by the brutal and sudden onslaught, many of Gilles’ men-at-arm were slain and the rest panicked. The Duke himself had been knocked off his horse and would have surely perished to the mauls and clubs of the troll beasts, were it not for his squire. Septimus, blessed with strength and solid constitution despite his early years, picked up his master’s ceremonial bastard sword and beheaded the first two creatures to come at him. Inspired by his bravery, Gilles’ soldiers rallied and fought back, eventually driving the troll raiders off.

In recognition of his deed, Gilles commissioned the most renowned swordsmith of Kaerok to forge a two-handed greatsword for Septimus. In due time, the Duke personally knighted Septimus and elevated him as a Champion of Vaure - it was an honour Septimus repaid countless times over. For in the years that followed, he led the forces of Duke Gilles to one victory after another, dashing rival nobles and ogryn raiders alike.

It was Septimus who led the decisive battle against the tribe of Grukh Ribcrasha’ - the undisputed leader of the motley alliance of ogryns, trolls, and skinwalkers. Grukh was a massive beast, twice as tall as Septimus and twice as broad in the shoulders, wielding a maul fashioned out of dragonbone. But none of that daunted the brave Champion, who issued a challenge to his bestial opponent there on the battlefield. As steel clashed against bone, the warring armies stopped to watch the duel of their leaders. Whoever wrested victory in that clash would ensure the fate of the entire battle.

And though Grukh possessed monstrous strength and endurance, Septimus’ skill had proven to be greater. He feigned weakness, luring the Ogryn King into overextending his grasp, then took Grukh’s ugly head off his shoulders with a single mighty stroke of his greatsword. In that moment, a sonorous warcry rose above the field and the Knights of Kaerok pressed the charge. Their foe fled in disarray, most dying to lances and swords and arrows of the Banner Lords. Victory was so complete and so decisive that for a full century forthwith, the north of Kaerok knew peace and not a single troll dared leave its mountainous den.

This victory and Septimus’ growing reputation eventually helped Gilles of Vaure to take the throne and hold it against all attempts to overthrow him, thus starting a new golden age in Kaerok’s history. Septimus himself served the King with honour and loyalty for many decades until, eventually, his martial prowess drew the gaze of the Arbiter, whose call he could not ignore. But that is another story. 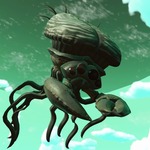 This story was left unfinished, as it says: " close to the mountain range of ---"