Vikings:war of clans game is most popular game in india.in few month this game growup in my country.next year vikings war of clans game is number 1 game in india.and almost in the world.this game easily understand and play this game.All information are given in the game menu.any problem then support team help us.24 hours they resolve our problem.and new friends connect to this game.

almost this game is really my hurt.thank you Sir.

I love this game.Vikings war of clans.

Sons of Odin, the results of the writing competition are in and we can reveal the winners:

Congratulations! We will contact you in the near future to deliver your rewards.

We would like to thank everybody who participated in the giveaway! It has been a pleasure to see so many interesting works.

In month of march of 2015 i was searching for game and this game showed up in top 30 trending games. I had played many different PC and Phone strategic games so i thought of same structure and same gameplay(Develop and fight and few members only). But this proved to be better than rest of those games. I started in kg159 and after completion of tutorials i was amazed to see the map size and i thought it was enough but when i went to global maps i was like OMG this game is so huge and went on playing hours and hours with my clan. But alas that kingdom went dead with 3 way battle and i quit that game in November.

Then in December i again started but in 229. It was a newly formed kingdom so i made my clan and started recruiting but was in competition with a girl in doing that. And finally Pretty face won more players and we merged our clans and shared my knowledge on Hypermaxing and Bank account. But then after few months she quit and we got new leader. And we were again in war but this time we had god hitters and thing went to our side at that time. So we got 300Mil rss in total from their clan as spoils of war and soon Russian clan spent more and were big enough for whole kingdom. So we left fighting and focused on farming for more rss and speedy growth.

Then came SH update and all our hypermaxed rss went to build that plus all 87 of us farmed at overtime in game and became first to build SH in our kingdom. And then there was our first KVK, in which i was scouting and got attacked by a 60mil giant. Talked to her and we became friends but i didnt shielded for whole kvk and we got into good friends standards so she came to my kingdom and we as a clan had a nice happy peaceful NAP vikings life. This was my first purchase in game after so many monthas and i am still rembering it as it gave me a damm huge boost in game. Then our biggest Russian clan wagged war against whole kingdom and due to endless war many of our big hitter quit which was way bad for us. But those were hard times for all of us as we missed our friends and even were on front line for our small players. Soon we had peace and they still attacked many clans but half of kingdom was dead or either were in smaller clans applying their own rules. Then came uber update and we ll had really hard time for doing invader knowledge at max.

Then i started tile trapping as it was new in those days so i was winning. Now Cub had tasted Blood, Became more troop overloaded and had many wins with quit few loses too but in cvc i had destroyed many huge players. This was one of my good hits which i had saved. Later on due to an upgrade rss from cvc got reduced so we had to merge with another clan for more influnce and good rss to carry on the fight. So 3 of english speaking clan and 1 rus-eng clan merged making me an elder and we had progress on game. Made many more contacts yet were very happy being second best clan in kingdom and better fighters than before. I had to quit game due to medical reasons but when i came back after few months i was warmly welcomed by my clan members. Then i started teaching tactics and shortcuts for learning, fighting, yielding and all other stuff to new players by making temporary accounts and  going to new kingdoms and helping clans there to grow and set up in a motion so they dont face problems which i faced and enjoy game more. And finally few days ago i was able to find one of my enemy without shield and destroyed him making an offering to fire of revenge. This game taught many things to me.

This all are benefits of this game if taken in life also. Which i have done and had awesome results via it.

Thank you Plarium for making this awesome game. I am enjoying it and making others also enjoy it. :)) Vikings War of Clans is a game involving multiple aspects and nuances.  There is military strategy, farming, cooperation, fellowship, teamwork, and fighting.  We all enjoy each of these differently, and in our own ways.  However, for me Vikings War of Clans is about Unity.  It is about forming bonds and staying true to those bonds through the thick and thin.  I do not speak specifically about clan loyalty, although that is important.  Instead I am referring to finding that individual within the game that becomes a friend, becomes more than a passing acquaintance, and perhaps becomes a love.  Someone or even sometimes someone’s who are there both in the game and in real life.  Sometimes we may start the game with that individual or individuals.  Other times we may seek that individual out through various clans and various kingdoms until we find them or they find us.  In my kingdom I have seen examples of both kinship and betrayal.  I have seen self-sacrifice that would be deserving of Valhalla, and disappointment resulting from defeat that would make Valkyries weep. Yet nothing has made a greater impression on me than Unity.

For me the manifestation of Unity is sitting with someone.  By this is I mean do you locate your town beside theirs?  Of course we all have spots or sections where we choose to locate our town.  Additionally, we often can even have assigned locations within our strongholds where we return after battles or to perform upgrades to grow.  Though, what I speak of is different.  When I first started the game I did not comprehend what Unity really meant.  However, now through the example of 2 of my clan mates I do.  For me it means, When you find that someone in the game do you follow them?  Do you sit with them each night while you or they sleep in real life.  Do you follow one another to other kingdoms for battle?  Have you both followed one another from one or more Clans until you found the right home?  Do you go where they go always so that wherever they are you are there also?  That is Unity.  It is a bond between 2 individuals that is lasting.  If their shield drops you will reinforce them until your troops are gone, and you know they would do the same for you.  You would share your last resource with them, as they would do for you.  You are there for one another and unified regardless of the difficulties or challenges.  It is the Unity of Vikings.  That is what I love the most about this game, it is my purpose in this game.  Have you found your Unity? 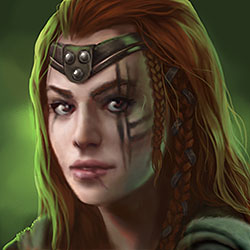