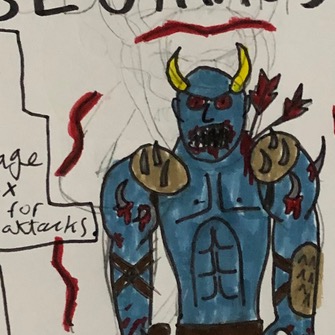 My entry for the contest is blutrausch which means blood rampager in German. He is a powerful demon who collects blood after attacking an enemy champion, when he has collected enough his blood rampage attack is ready and for the next two basic sword attacks he does do 2x damage. next his fire sword can unleash a deadly wave of fire wich targets 3 enemy champions at the same time and deals only 60% of his normal sword attack but as it hits 3 champions it makes up for it. he can also heal people but that drains Away his blood rampage Attack it heals champions 25% of their max HP. finnaly his main attack (I have not named it) he can make sharp rocks burst out the ground and splitting into two trails targeting two enemy champions dealing 1.5x damage and giving one of your champions a damage increase picking from them randomly. this also decreases the damage down to 80% of the 2 champions who were targeted during his main attack for their next attack.