Update! Get ready for glorious battles 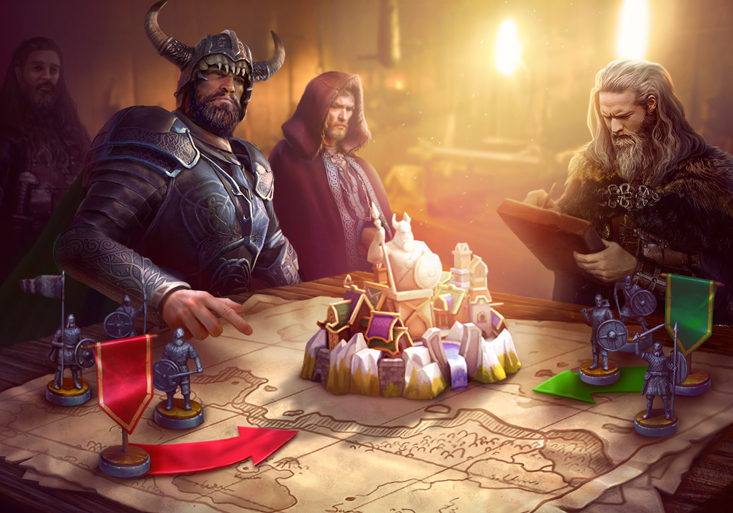 The North recognizes only strength. A moment of weakness here can lead to an epic disaster, while one right move can lead to a dizzying victory.

The favorite pastime of all Jarls is fighting other Clans, especially if the battle is expected to be fierce. There are still seven categories of tasks in the Competition, but they have been revised:

- Battles in Towns and resource locations

- Battles in the Place of Power

- Battles in the Clan Stronghold

The number of points you can receive for yielding resources and hunting Invaders and Ghosts has also been changed.

If your Clan wins the Clans Battle, it will receive bonuses that speed up processes not only in the Stronghold, but in your clanmates' Towns as well. You can view them in the Bonuses section of the Events window or in the Info tab of the Clans Battle window. The bonuses have been combined into two categories:

With new boosts, it becomes even easier to defeat an opponent. You can increase the number of warriors on a march by 460%, enlarge your troop in an Onslaught by 955%, and train 7,300% more warriors in the Barracks. Hurry and try out the new boosts!

Space for your clanmates

When constructing the Clan Fortress, the Chief should bear in mind that the minimum distance to the Stronghold of another Clan is now 16 tiles. This rule will not affect already constructed Strongholds.

Nobody wants to lose access to a Town that has been developed with such love and care. That is why smart Jarls link their account to one service, but brilliant Jarls link it to two services at once, especially since there is a possibility to link your game progress to Plarium ID and Apple ID (for devices with iOS 13 or later) to save it.

Convenient searching saves valuable seconds in battle and increases your chances of victory. Boosts and Marching Speed-up items are now sorted in descending order by bonus value and duration.

Marker in the Bank

When entering the world of Vikings, you will immediately see how many rewards you can claim. A special numeric marker on the Bank icon and the Subscriptions tab shows the number of available rewards for active subscriptions and for entering the Bank.

Sending coordinates to the chat has been updated: location information is now sent along with location coordinates, and if you send Town coordinates, the Jarl's name and Clan tag are now shown alongside them.

Viking, life is full of surprises and dangerous pitfalls. Be well prepared for any twists and hold your weapon tightly in your hands, you will need it more than once!