Events in the world of Vikings: War of Clans 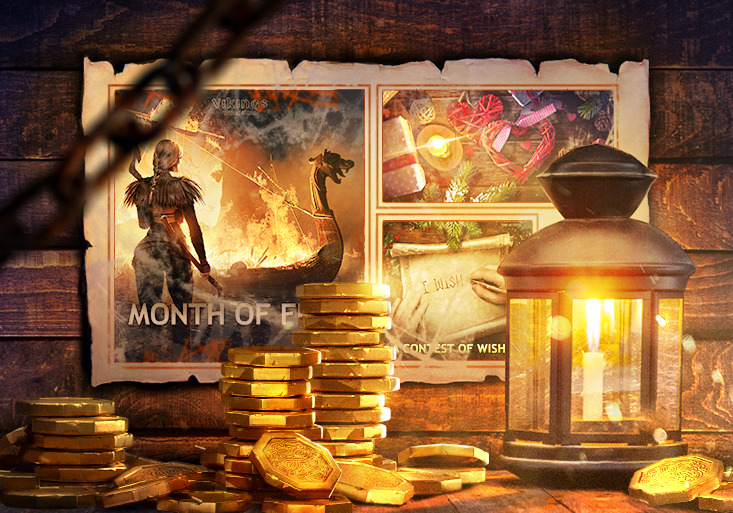 Vikings are known for their battles. But they also like to take part in giveaways, listen to good stories, and discuss the latest news in the North.

Over the last six months, there have been many interesting events, and the Vikings proved once again that skillful Jarls are skillful in everything they do. They are great at wielding weapons, leading glorious military marches, cooking tasty dishes, and wholeheartedly enjoying themselves.

A giveaway for good wishes

In December, our great warriors faced a real challenge – to recall everything that had been done in the past year, make plans for the future, and write season's greetings for all Jarls. This merry Facebook giveaway definitely warmed everybody's hearts.

For a whole month – from the end of December to the end of January – the Kingdoms Battle: Fury raged all over the North. Vikings experienced this harsh Competition four times and proved that they are rightly called the best warriors in the world.

In February, we had at least two notable events: the reworking of categories in the Clans Battle according to our Jarls' suggestions and a giveaway on Facebook to celebrate the update. To participate, Jarls needed to write what Clans Battle categories their alliances won. Then 30 randomly selected entrants received resources and boosts for their Clan Stronghold as a reward.

Valentine's Day for all Vikings in love

On February 14, our official Facebook community shared a romantic story about finding true love in Vikings: War of Clans.

On March 15, anyone could turn into Ulf the Brave simply by using his face filter on Instagram. The giveaway was heartily welcomed, and the Ulf face filter was used over 550 times. And there were great rewards as well: the Vikings who had posted the most creative videos received 20М Gold.

In March, the treacherous Leprechauns invaded the northern lands. To help every Jarl get ready for the battle with the Invader, we held an activity in our official Facebook community beforehand. Vikings needed to catch the Leprechaun and post a screenshot in the comments.

Brave warriors also took part in a giveaway on Facebook and showed the Leprechaun the way to the hidden treasures – each of the 30 lucky winners received 1М Gold.

Achievements of the whole North

With the April update, achievements appeared in the world of Vikings... and they made a big impact! Jarls highly praised the new addition and began to share their knowledge on social networks of how to unlock secret achievements.

Vikings, all these fun contests make time fly like an arrow! Visit our Facebook page more often, participate in new giveaways, and win!