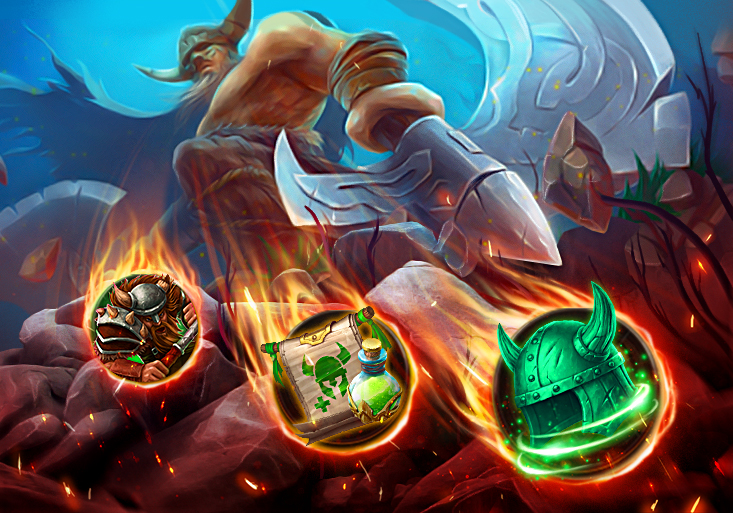 Preparing for battle and your scouts report that the enemy is stronger than you? Don't have enough resources for building or warrior training? Don't rush to change tactics — there is a simpler solution.

There is always a solution

The various stats of your Town, troops, Hero, and Shaman can be upgraded with the help of special items — boosts. You can purchase them in the Item Store, Clan Store, and as part of Bank offers, and also receive them for some in-game actions, for example, as a reward for participating in Competitions.

You can apply a boost in the Boosts window, where all items are divided into the following categories: Military, Resources, Development, Hero/Shaman, and Favorites. The last category is useful for adding your favorite boosts. You can also activate boosts in the Item Store.

Unlike bonuses that are granted by equipment, Knowledge, and Skills, boosts have a temporary effect. When boosts expire, all increased stats return to their previous values. To maintain your superiority over your rivals, check the timer in the Boosts window and extend their duration.

Remember: a boost must be activated before starting an attack, march, Knowledge learning, building construction, warrior training, etc. If you apply the 1-Hour Resource Yielding Speed-up, 50% boost and then attack a resource location, the yielding speed will increase by one-and-a-half times. However, if your troops started yielding before the boost has been applied, the yielding speed won't change.

If you apply several of the same items at once, their durations (but not bonuses!) are added together. For example, when you apply two 1-Hour Increased Offense, 30% boosts, the bonus will be active for 2 hours, and your offense will increase by 30% (not by 60%).

You can't use two different boosts from the same category at once. If you apply the Dragon’s Citadel Town Skin, and then The Cradle, the first Skin will expire.

Surprise is half the battle

Items that you apply can't be seen by other Jarls. Bonuses from boosts that are activated in your Town remain under wraps even for enemy scouts.

As you know, a great warlord wins the battle before it even starts. Stay one step ahead — use boosts.