“We fell in love while playing Total Domination!”

In 2011 I started playing the game because my friend Micheal Wouterse invited me and I did not know how this game would change my life. I really liked the game and especially the interaction with people all over the world, because behind each and every single sector there is a real person.

My starting Clan was “DIE” clan and I worked my way up to DCL. My job as DCL was mostly solving problems with clan members and other clans. One morning I got a message from a DCL from the “WU TANG CLAN”, it was Elita Prince, and she had troubles with Joe Goodman- one of the members of my clan. What she wrote me was funny and straight to the point,- I immediately noticed she was not a person to mess with…

Because I was curious I decided to send her a few messages, the- “How are you doing or are you okay type”.  At the time I was single and during the chat she told me she had also recently broken up with her boyfriend. After that conversation, we filled cyber space with many messages as well as in the game and on FB. We had every day contact in “The Wasteland”. One day, after around 7680 messages, she invited me to come over so we could meet each other in person. I travelled to the UK and we met at the Leeds train station, where she surprised me by waiting in an unexpected part of the station.

Or as one would say in gaming slang: “my defense was smashed by her offense power!” :) We chatted for many hours and played the game together, attacking other sectors and capturing emitters. At that time, “Joe Goodman” arranged a massive attack on her base and I was trying to protect it as best as I could. That was how we we spent our first 10 days together. I only travelled back home to take my personal belongings because I felt and knew this was my soul mate for life. I even joined the “Wu Tang Clan” so we could do everything together.

After a good time at the “Wu Tang Clan”, I went for a non emitter clan called “RESISTANCE” (now known as “LUCID”). Elita was still loyal to the WTC but after a while, she followed me to the “RESISTANCE” one. We are happy together and are enjoying playing the game with a bunch of happy and crazy clan members who are still playing under the lead of “The Hogfather” - Wendel Raymond Chambless. We moved together in to a new house in Holland and planned to get married. Unfortunately disaster struck just before it as I suffered a heart attack. We didn’t let that stand in our way because we were used to fight, as in life and as in the Wasteland, we managed to get married in the hospital.

Life always has unexpected events for us. We met online, in a war game and married in a hospital. How special is that? We are daily players, my wife has her base in the attic, and I have mine in my “man’s cave” because Total Domination is so special for us that we don’t think we could leave the game unless they pull the plug out of it. Should that happen, I hope Elita and I will be the last players who close the door behind after us. 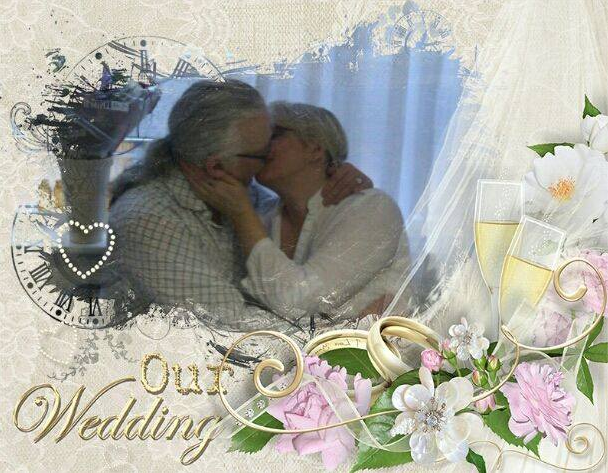