Flux, Dimensional Gates, And You

STRATCOM anticipated that Flux and Dimensional Gates would raise a lot of unsettling questions. For example, if I teleport, is it truly me that teleports, or a copy of myself? Is the original “me” destroyed?

STRATCOM recommends putting aside these petty concerns. They have compiled a practical list of answers to common questions, so that you can relocate your Sector with confidence.

Flux Gates and Dimensional Gates are powerful tools, and it is important that you know how to use them. Let’s begin!

Question (Q): What are Flux and Dimensional Gates? How are they different?

Q: What is a Vacant Zone?

Transportation of Troops & Caravans to and from Relocated Sectors

(Q): What happens to another Player’s Troops that are moving to my Sector while it is being relocated?

(A):  If another player sends Troops to your Sector while it is being relocated, they will be returned to their owner’s Bunker. General Winters will inform the other Player of any returned Units in a special message.

Q : What happens to another Player’s Troops (Invasion Forces/ Reinforcements) that are in my Sector while it is being Relocated?

A: Reinforcement Troops, and Troops actively invading your Sector, will Relocate to the new coordinates along with your Sector.

Q: What happens to my Troops that are moving to another player’s Sector at the time of my Sector’s Relocation?

Q: What happens to my Troops (Invasion Forces/Reinforcements) that are in another Player’s Sector while my Sector is being relocated?

A: They will stay at the target Sector and remain unaffected.

Q: What happens to Troops (Invasion Forces/ Reinforcements) in my Sector, if their owner’s Sector is turned into a Vacant Zone?

A: Such Troops will stay in your Sector and remain unaffected.

Q: What happens if I send Troops and/or Caravans to a Sector that becomes a Vacant Zone while they are travelling there?

A: Your Troops would return to your Bunker immediately. Caravans that were NOT sent via the Trade Gateway will continue travelling to the new location of the target Sector (this may cause travel time to increase). They will deliver their supplies and return to your Sector, empty.

Q: A player creates an offer at the Trade Gateway, then Relocates his or her Sector. Where do the Caravans go when the offer is accepted?

A: Caravans sent via the Trade Gateway will always travel to a Sector using the coordinates which are indicated at the moment of the trade offer’s acceptance. If those coordinates are a Vacant Zone by the time the Caravan arrives, the Resources and/or Modules will be delivered to an empty space, and no one will receive them. The Caravans will then return, empty, to their senders.

Q: What happens to another player’s Caravans that are on their way to my Sector while I am Relocating?

A: Provided that the Caravans were not dispatched via the Trade Gateway, the other player’s Caravans will travel on to your Sector’s new coordinates. This may cause travel time to increase. The Caravans will deliver their cargo and return empty to their sender.

Q: What happens to my Troops that are participating in a Joint Attack at the time of my Sector’s Relocation?

A: Your Troops would continue moving to the target. Troops’ travel time won’t be affected.

Q: What happens to my troops that are returning from a Joint Attack at the time of my Sector’s Relocation?

A: Your Troops would continue moving to your Sector. Troops’ travel time won’t be affected.

Q: What happens to Missiles fired at my Sector while it is being relocated?

A: The Missiles would return to their owner’s Sector.

Q: What happens to Missiles I fire at other Sectors while my Sector is being relocated?

A: The Missiles would reach the target, and their travel time would not be affected.

Q: What happens to my Troops travelling to or from Infested Sites or Campaign Missions at the time of my Sector’s Relocation?

A: Your Troops’ travel time to and from these destinations will be unaffected. Infested Sites and/or Campaign Mission objectives will move along with your Sector. When you reach your new coordinates, these locations may appear to be located differently, but the distance between them and your Sector will stay the same.

Q: I have a Combat Report on a Sector that is relocated. What happens to the data on this Report?

Q: What happens to my Bookmarks for Sectors that Relocate?

A: Your Bookmarks will automatically update to reflect the Sectors’ new locations. This data should update within 10 minutes of a Sector’s Relocation. If it does not, try refreshing the page.

Q: What happens to my Bookmark of a Sector that is automatically turned into a Vacant Zone due to the owner’s inactivity?

A: These coordinates would remain the same. Because the owner of this Sector is inactive, when you click on the coordinates, you will see a Vacant Zone. In the future, these coordinates will be displayed as question marks, i.e., x: ??, y:?? . 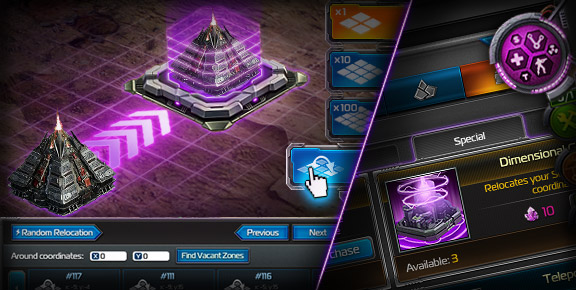