11 reasons why Clan Missions are ideal for you

The Clan Missions feature recently hit Total Domination and although a lot of questions arose from it – the message is simple and clear: together we are better.
With the contribution of one or a few Commanders, the Clan can expect basic rewards – nothing too special. But if everyone joins the Clan, then everyone is in the running for a big Reward Pack – and huge prizes.

Continue reading the 11 reasons why you should gather your troops and participate in Clan Mission:

o   Playing a Clan raises team spirit – uniting everyone with one common goal.

o   This relatively new element allows Clan Leaders to monitor the activity of their Commanders on a daily basis and to determine who's giving their best and who's slacking off.

o   Due to regular rotations of different Missions, hundreds of thousands of players who each have different strengths and tactics will be online playing. This means that every player, and every Clan, will have different strong points, and with this system they can choose to partake in the Missions that suit them best – and learn from other players.

o   Players can effectively get Resources, Unites and Boosts that are rewards for completed Missions, while not compromising soldiers to reach some of the new Clan Mission goals.

o   Mission Rewards are shared evenly between everyone in the Clan. Even players who weren't active during the Mission and didn’t take part will receive rewards.

o   Rewards are received in the form of Reward Packs, which can be claimed from the Black Market for maximal convenience.

o   Clan Missions are not issued to everyone at the same time. Some Clans may not have them available at a given time. If your Clan is currently involved in a Clan Challenge, you might not be able to participate.

o   Rewards might not seem prestigious or very impressive at first glance, but when you consider that every Clan member gets a Reward Pack, and you multiply the reward by the number of Clan Members, you'll see that it's very lucrative.

o   When a Reward Pack is opened, its contents are immediately dispersed to their respective places. This might seems somewhat unusual at first glance, but eventually it will make sense. When you're in a blunder, you can just hit up the Black Market and start opening all of your prizes.

o   The contents of a Reward pack expire within 3 days, so you need to be super quick to activate them. This feature also serves to prevent inactive members from benefits from Missions that they didn't participate.

o   Like any good thing, some Clan Missions require investments. It's completely up to the players, with the guidance of their Clan management, to make the tough strategic choices with regards to putting their armies at risk or playing it safe. 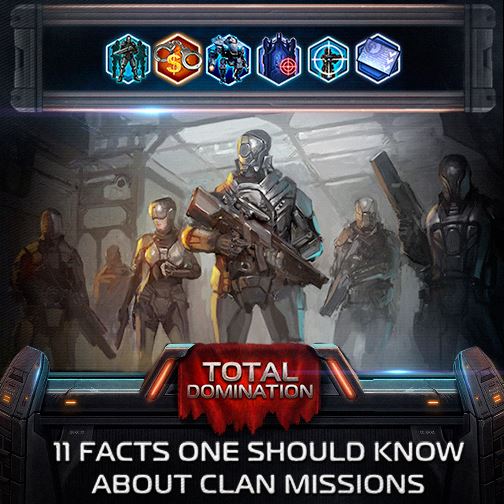