General T. Winters: I want to know more about the REGULATORS. What are they all about? Tell me how they operate?

Commander Chris Larson: Our Clan is very proud – like other Clans. We all co-operate with a set of objectives in mind. Our goals and strategies are important to us. We make sure that we communicate very clearly with our Clan members regarding precisely what needs to be done for us to accomplish our goals. We make it clear what needs to be done and why we feel that our goals are necessary. We have become a dominant Clan by dint of our efforts – our team efforts. We know that as our communication is strengthened so our Clan becomes stronger too. I’d like to briefly discuss a couple of memorable battles. We’ve had several of these… we have tasted victory many times – oftentimes with assistance, but mostly Ace out (alone).  On the Positive Side? The Bio-Core LEVEL 5 Take Down ranks highly. MDK, #1 Danse Avec Les Nains – these were glorious battles for us. These all had LEVEL 5 Emitters that fell for various reasons.  Now, there are some battles that REGULATORS had prior to my joining, and I’ve forgotten about some of them since I’ve been there. It is purely accidental if I’ve left anyone out. These are some of the names that popped into my head. You guys have all been worthy adversaries and if you weren’t we surely would not have rained our fury down on you! On the downside… S&D and DEFIANCE. These Clans both attacked and we had no targets to hit back at. We sustained heavy losses but our defensive capabilities were sound. We never lost our Level 5 Emitters. But boy oh boy did we come close on one occasion. Since that time, we have learned and we can now meet any joint attack feature.  We’ve also run scores of simulations to learn what would be required to seize control of a defended Level 5 Emitter that we owned. We’ve made this issue extremely difficult for any group of Clans to achieve. Is this achievable? Absolutely! Will the attacking Clans face severe costs? You bet they will! We will reap havoc upon them and their offenses will suffer immense losses. Everything that they have built will be lost. Clearly this is a risk/reward game. The goal is to have the rewards outweigh the potential risks then we’ve got a fantastic chance of making it through. This was precisely our goal before Joint Attacks and we’re constantly redefining what it is that we do and what we need our members to do. We can monitor what’s being done on other Emitter attacks… that’s what the situation is. What do I enjoy most about Total Domination™? I absolutely relish the prospect of fighting a Clan alone and then they go and call all their friends to come and fight us. It’s like 20 or 30 on 1 that’s what I live for!

General T. Winters: Hooyah! Sounds like a walk in the park for me, Commander! That’s some action-packed fun right there. We’d like to know what your tips are for New Recruits?

Commander Chris Larson: Let’s not mince our words at all: Total Domination™ is a War Game. There’s nothing that can substitute for preparation. It takes many troops to successfully wage war, so your vaults and mines will need to produce copious quantities for you to maintain your Army. Your Vault minimums should ideally be 16 – 18 for a 4,000 – 5,000 Unit Army. You’ll have to upgrade your Banks and Manufacturing to prepare for the inevitable upgrades of your Mines and Vaults. Obviously if you’re a newbie and you’re getting attacked by higher-level players, you’ll have to think outside the box. These stronger players are obviously looking to seize your resources. What you’ll have to do is to think of ways to be creative in your upgrades so that there is nothing of value at your Sector. Commanders are fully aware that it is simply not worth their while attacking for just 15,000 or 20,000 in resources value. I would advise you NOT to write to them and make threats against them. That will only serve to seriously tick them off that you’re sulking about being raided in a War Game. Rather, make it clear that you’re active and keep your troops holed up and your resource levels at a minimum. Mark my words… they will soon leave you alone! With a strong army you’ll be better able to attack your enemies. I always recommend upgrading your Tech Tree. Get your units up to speed; Level 20 is ideal. Become part of a Clan that teaches you how to safeguard yourself against enemy attacks. It’s not the Clan’s job to protect you; it’s your job to build an Army and strengthen it to deter attacks against you. You must be ready to meet every challenge head on. Your Clan is there to provide guidance – tips, tactics and strategies – not to provide defensive units when you’ve annoyed the wrong foe!

General T. Winters:  That is rock-solid advice right there! Commander, I may have to adopt some of that advice myself. What I gather from what you’re saying is that you’ve developed a formidable network over the years. More power to ya!

Commander Chris Larson: Yes! I’ve been really privileged to have made many online friends in the game. These people have earned my respect and I have earned theirs. I really enjoy talking with them. What’s especially notable is that I chat with friends and foes. Gamers should know the intricacies of the game and how to accomplish objectives in the game. Believe it or not, that type of information comes from multiple sources – most of them aren’t even friends! I’ll tell you straight up that if the info came only from friends, I’d have very little knowledge at my disposal. I can tell you with complete certainty that the information my enemy has is vastly different to the information I have. Consider that what the enemy knows about my Clan for example would be prized Intel to others who want to attack my Clan. A good way to ease the tensions and calm the nerves is to have a polite conversation at the conclusion of the battle. The respect that you give is the respect you will get. Trust me on that one!

General T. Winters: Commander, you’ve nailed it once again! I fondly recall the one time I was beating the daylight out of this Cyber Dog and then WHAM out of nowhere… Hmmm – this darn radiation is clouding my senses… Ah forget it! Commander, I want to hear a really funny story – tell me one!

Commander Chris Larson: The fun is in the social aspect of the game. I have enjoyed lots of laughter in late night Clan conversations. That’s where the fun really is for me. Sure there’s blood and guts in the game; but it’s all about the GAME – it’s FUN! The more you put into Total Domination™ the more you get out of it. Almost forgot to mention that I really enjoy creating the Bronze, Silver and Gold medal awards for all the funny aspects of the game. As this year closes out, I’ll put some time into that again!

General T. Winters: That’s something that I look forward to Commander! It has been a real eye-opener listening to you Commander Chris Larson from The Regulators. I’ve been sipping on a delicious cup of MUTAGEN here in STRATCOM; rest assured – I’ll see you here in the Wasteland! 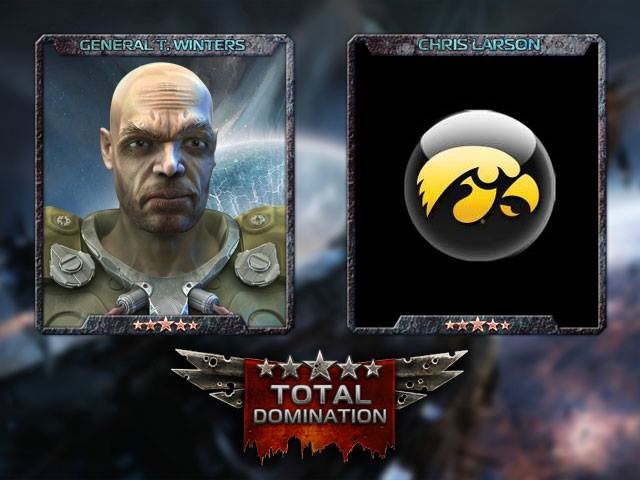 To all you other badass Commanders in the Wasteland – play nice in Total Domination™. This is General T. Winters over and out!