Gostor, Ravaged and Beaten, But Not Yet Broken

Gostor, one of the newest Kingdoms within Thrones: Kingdom at War, has been quietly protected within their borders since their inception. They have lived out their lives in relative peace—they bickered among each other from time to time, but by and large, peace has reigned.

No longer. The floodgates have been opened and the gods have thrown back the thin curtain that has protected their lands. The thirty-day protection that kept others out of their lands has been shattered and a horde of would-be invaders have descended upon their ripe, fertile lands.

The citizens of Gostor rallied around their Lords, drawing their swords and mustering what forces that they could. The fighting was harsh and reckless, and a disaster for some. 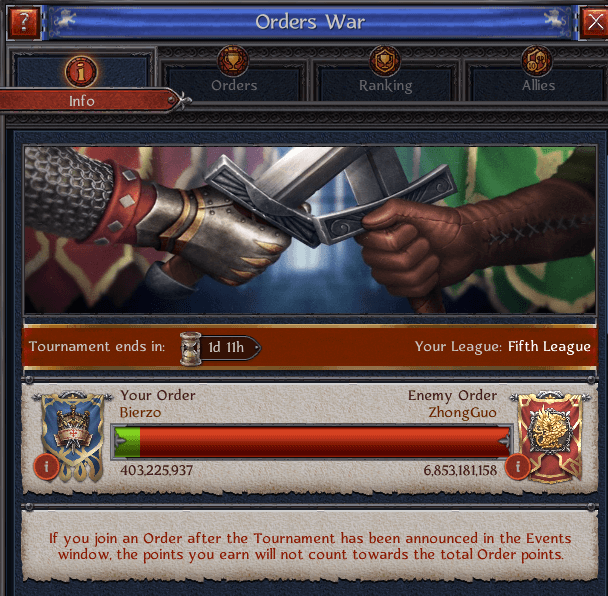 One collection of young warriors within Gostor, known as the Bierzo, were pitted against the Zhong Guo, a seasoned fighting force and one of the most efficient within their tier. It was a newborn Order against an Order that had already made a name for itself.

The Zhong Guo hail from the Kingdom of Saint Dery, one of Gostor’s neighboring Kingdoms and now one of their most hated enemies.

Unfortunately for the Bierzo Order, their first pairing in what is to be many more events to come was against one of the greatest new forces this realm has ever seen. As could be seen from the rankings, the Zhong Guo were the top-ranking force within the competition, a feat that is not easily achieved, no matter the age of your Order. 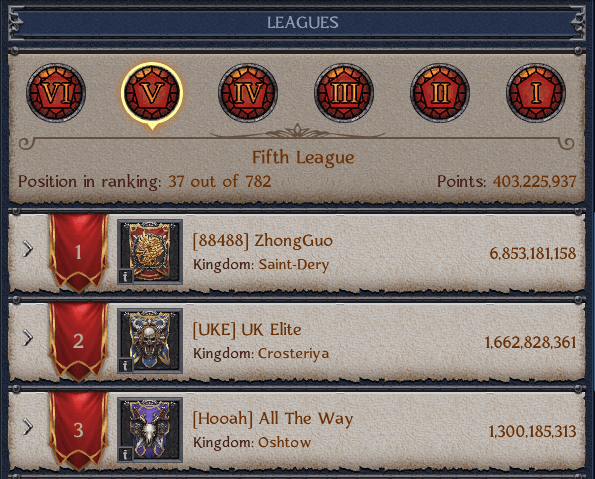 The Bierzo have little to no chance of making a comeback in this event. They have decided to rather retreat and shelter what forces they can under protective shields, commanding their men to do what they need to do to survive the ongoing storm.

Battles rage on in similar fashion all across Gostor and they are learning a valuable lesson in these defeats. Life is harsh, and to the victor go the spoils. Training and preparation will be key moving forward.

Gostor must band together, strengthen their armies and grow their might, unless they wish to face similar results again in the future...an outcome in which we greatly doubt they want to see repeated.