One With The Dragons

1. How long have you been playing Stormfall?

I don't remember the exact date, but I think I began playing in August, 2013.

2. Is it the first significant achievement you completed in the game?

I have completed almost everything else. As some examples, my Mines and Townhouses are maxed out, and I am currently researching the last Dragon Art… you name it, I’ve probably done it.

3. Why did you concentrate on leveling up these Units?

Dragons are my strongest Unit. I would say my Necros are also getting very powerful, but I prefer using my Dragons.

4. What difficulties did you face while working on upgrading this Unit?

The last level took forever… it’s not easy to do that much killing. Which is a good thing! You want it to be a challenge. Here is the last battle that finally levelled up my Dragons.

That last level took maybe two or three months of heavy fighting. It helps that they were my strongest Unit and they were the main force of my army, so they received more Unit XP from the battle too. 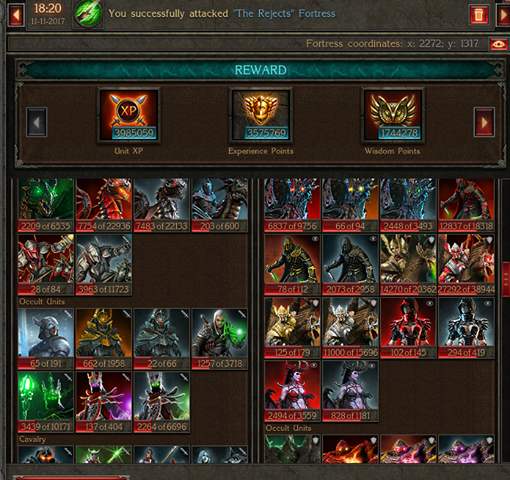 5. What suggestions can you give to other players who are still working on this goal?

It's easier to get Unit XP with Offense Units. I would also recommend applying 50% XP Boosts before starting any battles.

6. Do you have any plans on what Units you will upgrade next or any other achievement you will focus on?

I want to focus on levelling up all my other Units. I want to be as strong as possible to minimize my battle losses.

7. How do you plan to use your Dragons? Did you win any epic battles with their help already?

We have been at war since late June or early July. I had 90k dragons then. I have lost a lot of Units, but so have my enemies.

My League was attacked by a much bigger League. We have given them hell ever since and the war is still ongoing. We have had truce talks a few times, but we have not been able to agree on terms yet.

8. You are a Marshal of your own League - tell us more about “Asgard”.

I have been Marshal of the “Asgard” League for two years. In that time we have accomplished a great deal of achievements. We are currently looking forward to getting a personalized banner from Plarium!

I may be the biggest and strongest player in “Asgard”. However, being part of a great League, with dedicated men and women, is what makes true strength in Stormfall possible.