An Interview with Adam Holding, the creator of Stormfall FUNHOUSE

Alas, it has been many moons since we last talked, Lord Adam – it is good to see such a longtime friend and ally once more. As I recall, you had quite the journey before arriving finally in Darkshine; a journey that took you from Australia, to New Zealand, to finally the world of Stormfall. Tell us a bit about that, and about what caused you to arrive at last in our strange land.

Well, In 2012 I travelled from my home in Australia to New Zealand. I had decided to help rebuild homes in the city of Christchurch as it had recently been devastated by a massive earthquake. Being new to Christchurch, I had few friends there, so I would often find myself on Facebook, keeping up with my friends in Australia. FB is where I discovered the game of Stormfall, which had only just been released.

Stormfall has allowed me to make friends from many different countries. This opened me to a greater understanding and appreciation of our World.

Tell us a bit more about your own personal Stormfall experience. Has anything come as a surprise to you?

Since I began playing, in November 2012, my interest in Stormfall was captured by the people that I began meeting from so many different countries around the world.  The global interaction with many people is my favorite aspect of Stormfall.  Because of the teamwork required to play in a League, we developed friendships that still stand to this day. I was taken by surprise when I realized how much enjoyment I got from navigating the strategies required for a League to function efficiently as well as from the bonds I quickly developed with my League family. I was intrigued by the life experiences and perspectives provided from all these different people and their various homelands.

Indeed, I often take solace when viewing the countless nations and individuals who come to our aid. I find it a wondrously inspiring, joyful example of what it means to be human. Speaking of experiences, what do you do outside the lands of Stormfall?

Actually, prior to Stormfall, I had never played any online games. When I’m not fighting Balur and toasting the success of my League, you’ll find me fishing and enjoying the great outdoors.

Ah! A noble pastime for a noble man. And what about your experiences in the game? Give us a bit of insight into the most enjoyable and most frustrating experiences you’ve had while playing the game.

My most frustrating Stormfall moment was when I spied on a Castle I had farmed for 6 months with no problems. The spy report showed naught but a single Wraith present. 7 minutes later, I was shocked to see my Wyvern raiding party totally wiped out at this Castle. Thankfully, though, I was able to exact revenge; I caught the same unfortunate Lord with his entire offense out of the Catacombs only 3 weeks later.

For me the most enjoyable aspects of Stormfall are when bullies have their armies destroyed by my defensive traps in low level Castles. No one should ever be bullied, either in a game or in real life.

Protecting those Lords who are yet too green to ensure their own safety – a most virtuous gesture!
Tell me of your history with Leagues. Which ones have you been a part of, and what is so special about your current League?

I have been in several Leagues, but my friendships within the Wolf Packs are what I most value.
My previous League was Equinox Rising, and my Marshal there was Sue McEwen. What makes a League special to me are the friends I have there. The friends I have in my current League have become a family and together we have partaken in Clan Wars to fight for Beacons.

I recently moved to the “Rejects” League. I have some friends in Rejects that have been members for a long time. Rejects is a dynamic League, and it’s exciting to be a part of and to fight alongside some of the best players in the game. It is a tight family unit with some fun people.
Other players and Leagues find it difficult to battle Rejects, because we are so highly organized and have a strong family-style bond. Several of our members are fairly quiet in League chat but we are all there for the war effort, without question. Once war has been declared, we all come together as friends and family, ready to defend our kin and capture Beacons. Everyone feels the excitement as we march to battle and we share the joys of our victories as well as the fun of the battles we do not end up winning. I am eagerly looking forward to the future Beacon wars. Blood shall flow in the rivers of Darkshine!

I do not doubt it! Your League is renowned across Stormfall for its determination and teamwork. Do you socialize with your League members in real life?

I am planning to travel to several countries as I have a strong desire to meet some of my closest Stormfall friends. Stormfall has long entertained me, and I often catch myself daydreaming of dragon warfare. Next year I will be planning a holiday to meet some of my good friends that I have come to know in Stormfall, so I have some real-life adventures to occupy my mind as well!

I have actually already made one such trip - to meet Lady Sue, my former League Marshal. I travelled 4000km to a more rural region of Australia. It was a great adventure, as prior to that, I had never been to the southern state of Victoria. It is an incredible experience to meet another Stormfall warrior, and I have no doubt that we shall remain life-long friends. It was truly amazing to share the Stormfall experience and hear her laugh as we destroyed our enemies’ dragons! It is an absolute pleasure and joy to play together in person, and this is why I hope to meet even more players.

And what about your group, “Stormfall FUNHOUSE”? What compelled you create it?

I created "Stormfall FUNHOUSE" as an anti-rage page. Stormfall is ultimately a game for fun, so I decided to make a page for Stormfall warriors to relax and have a laugh. Sort of like the Stormfall Tavern funhouse. It has given many laughs, but also provided an opportunity for many Stormfall Lords and Ladies to form friendships allegiances with warriors from many different Leagues. The Funhouse has a widely varied international membership. That is my favorite aspect of it. We share jokes from all over the world, and our comedic interactions make the "Stormfall Funhouse" unique.

I am glad to hear it. I might consider signing up, myself! Now, if you wouldn’t mind telling us, what 3 things would you change about the game looking forward, if you had such a chance?

Well, I despise Fireballs, as I consider them to be a dirty tactic - but as they say, "all is fair in love and war". And Stormfall is, after all, a war game. Secondly, I would like to see an option to purchase Legendary Units using Resources, as I believe it would be fair to allow all players to access these great units. I'd also like to see an action animation battle scene when we raid or siege an enemy's Castle or Beacon.

Thank you for the input, Lord Adam, we will consider it. One final question – What guidance would you give to new Lords and Ladies getting started in Stormfall?

My advice to newbies is not to take Stormfall personally. It is, after all, a game for fun and there is no reason to treat others with disrespect. There is more than enough hatred in our world as it is! There is great respect and honor to be earned by a cold-blooded Stormfall dragonslayer who treats others with universal kindness. By all means, defeat as many Orcs and Griffins as you can – but be kind when the War is over. That’s what separates us from Balur’s Orcs!

Eloquently put, Lord Adam! I can see that you are a wise and noble Lord. Thank you for speaking with me – I hope to see you again soon when I have more time to spare from the battlefield! 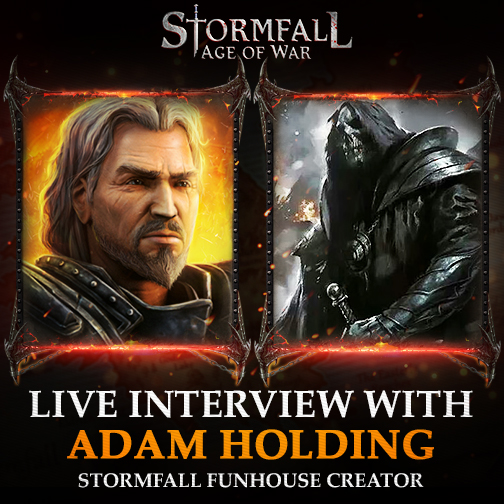