When playing Sparta, it is critical to understand the way in which battles are calculated. This would appear to be very simple, but many players struggle to grasp battle mechanics. However, once you get the gist of the way battles work, you will realize that high strength value attacks are no more effective than low strength value attacks, and thus the whole system can favor both David and Goliath!

We know that the result of any battle depends on the strength of the armies involved: offense on one side, defense on the other. I believe I have a simplified way of explaining how losses are calculated. This is as follows:

The prime example of my theory is demonstrated when both sides have the exactly same strength. This means that both sides have exactly 50% of the total strength and thus (generally speaking) lose 50% of their troops. However, if one army has 75% of the strength in the battle, it will only lose roughly 25% of its strength, while the smaller army will lose 75%.  If the strength ratio is 90% to 10%, the side with 90% loses 10% and the side with 10% loses 90%.

So what does this mean? The main conclusion is that in both sides lose roughly the same amount of actual power in each battle. For more information, see the chart below.  Although this sounds strange, in the above example, even though the stronger army’s losses are 9 times smaller, the army was 9 times bigger to start with, making the actual losses identical. 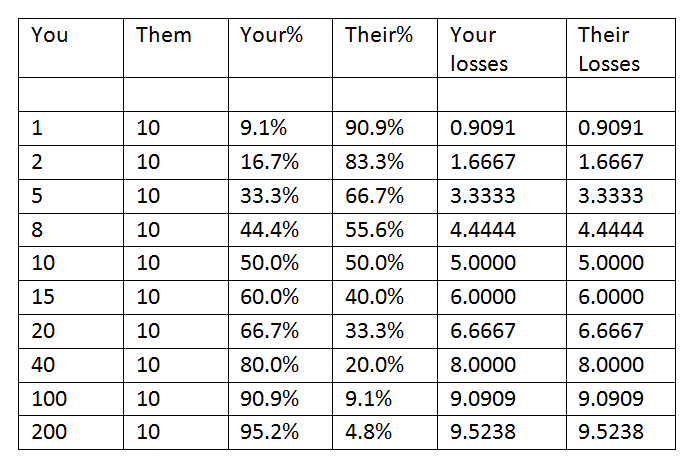 However, this is only really good for calculating losses, not finding the right strategy to beat your enemies. The answer to the latter issue is determined by three factors.

Due to the fact that different types of troops take different amounts of time and Resources to train, the time it takes for an army to recover from a battle can vary. As such, battle losses should be calculated not only in terms of Power Points destroyed, but also in terms of the time and Resources required for reconstruction. This should be taken into account when choosing which Units to train and which ones to send into battle. 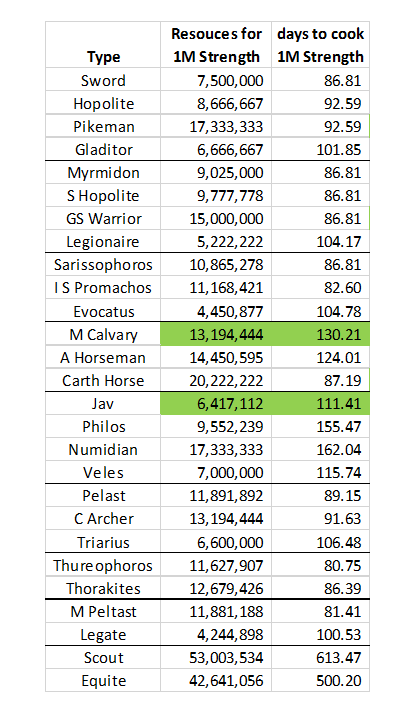 As you probably already know, each Unit defends differently against the different types of attacking Units. Take a Theophorus for example, which despite having an average defense of 400, has 500 Defense vs Cavalry and Phalanx Units, but only 300 against Light and Heavy Infantry.

This gives you a huge advantage against certain armies, but weakens you against others. Therefore, choosing the correct Units for the battle you are planning is an integral part of your strategy.

There are many ways you can improve your Units to make them more effective in battle. Improved Units essentially give you more bang for your buck: you get more strength with a lower number of Units, meaning you lose fewer Units, which in turn cost you fewer Resources to retrain.

The table below takes Myrmidons as an example, which have a default value of 240 Offense. It assumes that you have roughly 1,000,000 Offense in the battle, coming against the same value of Defensive Units. It then shows how battle casualties per 1 million Offense are reduced, the further you upgrade the Unit.

You can see from the table just how much Unit Upgrades dramatically reduce your losses. You would lose 2083 Myrmidons in a battle of this type if the Units were standard, but if your Upgrades totaled 150% you would only lose 833 Myrmidons! 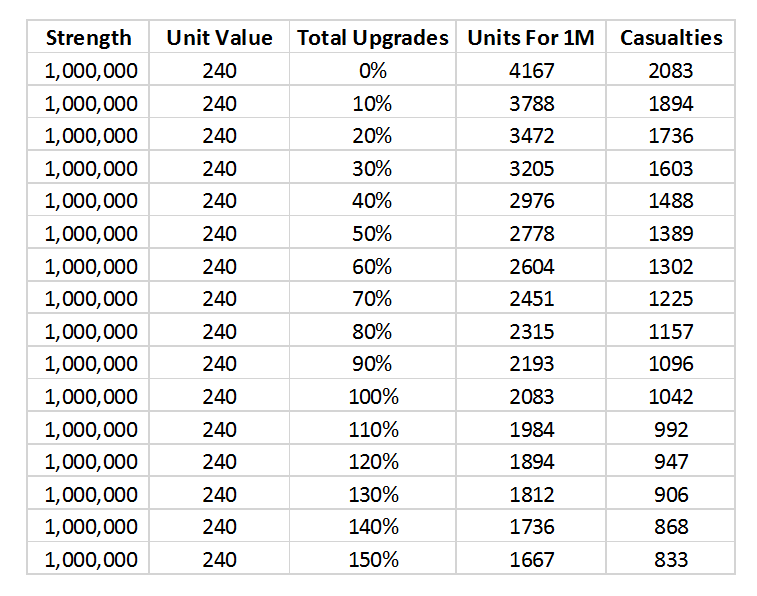 There are at least two exceptions, where I think the above information could be skewed.

The first is the what I call “overkill”, when one side is at least 100 times more powerful than the other. In these situations, the larger army can lose far less than the smaller army (and the smaller army’s losses are usually around 100%).

The second is essentially a rounding trick.  Let’s assume you are the larger army (by a factor of 4), so according to our previous calculations would lose a fifth of your troops.

However, if you only have 1 of a particular Unit, you theoretically won’t lose it because the formula says you should lose 20%, which it rounds down to zero. It is my belief that this can be exploited to create a “death blow” attack in which you lose zero troops.

In summary, my opinion is that you can exploit the key calculation that both sides lose the same amount of strength per battle, regardless of their total army strength.

This means that attacking or defending with 1 million or 10 million strength has virtually ZERO impact on determining who loses the largest amount of power. Therefore, small armies probing and looking for positive situations can still find positives against the biggest armies.

I hope this helps! Good luck!

This article was originally written by Dean Zaremba, who has granted permission for it to be posted on Plarium.com. Any thoughts or views expressed herein are the player's own, and do not necessarily reflect the views of Plarium Global.

Please note that the Sparta Battle Calculator described in the article is not officially endorsed by Plarium, nor has it been proven to be accurate, nor does it necessarily correlate with the battle calculations made by the company.