The Old Step Down, the Young Rise

Massive changes have recently occurred in our great realm. Yet the small changes cannot be overlooked as well: a new leader is born and is immediately put to the test.

Everything changes. This fact has remained the same through our realm's great history, and has become glaringly clear over the past few weeks. We have seen epic battles erupt all over the map, that have resulted in titanic shifts in power and great destruction.

Yet, some changes are more natural. As our old warriors age, new young ones step in to take up the mantle of leadership, vowing to do justice to their ancestors and carrying the torch on into the night, doing battle against those would do their people harm and protecting them whenever they can.

Recently, just such a change has taken place with the Lost Soul Argosian leadership. The Hegemon of this branch of the great Lost Souls family has announced his retirement from the leadership position, saying the following words before taking off the heavy mantle he has born for so long. 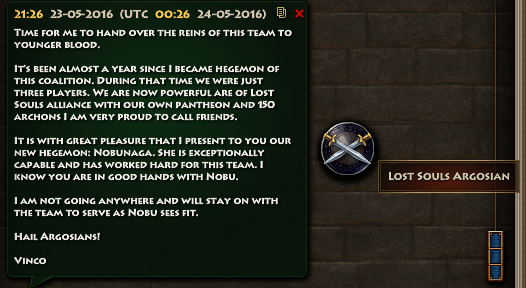 The new Hegemon, Nobunaga, was quick to act, immediately sending out orders to her members, addressing the concern he has in regards to the defense of their Pantheons. 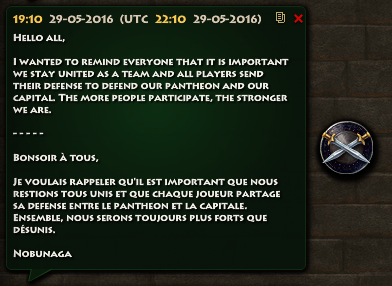 Yet, this would not be her last order. The wait was not long before her leadership abilities were put to the test. Soon after taking control of the Lost Souls Argosian, Nobunaga was forced to issue additional orders in regards to the coalition Barcelona, who had recently struck out against their Pantheon, directly challenging this division of the Lost Souls. 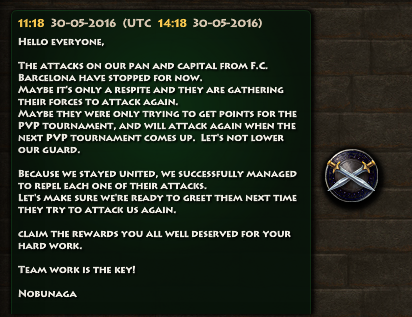 Repelling these assaults, the morale of the Lost Souls Argosian was strengthened, but the enemy was far from done. The attacks continued on long into the night. Thinking that the enemy was weakened at this time of leadership change, they were sorely mistaken. 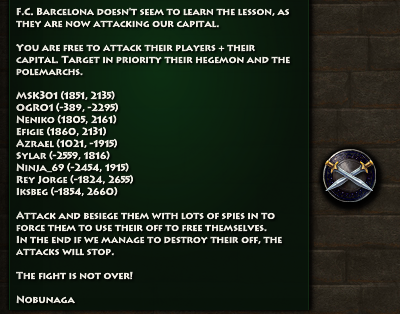 Nobunaga rallied her newly controlled Bannerman and gave the marching orders! The attacks would be launched at the Barcelona and those who most insulted the Lost Soul name. No rock would be left unturned and no sword unbloodied.

To this day, the dispute between these Coalitions continues on, unclear of who the victor will be, the Chronicle continues on, knowing that this won't be the last test for the new Hegemon of the Lost Souls Argosian, but confident that she will be able to weather the storms that are surely yet to come.