The Band of Killerz Battle to Defend Their Lands

A violent and vicious battle has erupted. The Band of Killerz, a strong and old coalition once again brought into the fray and bloodshed. Their lands are under siege and they are not going down without a fight.

The contender, Baphomet, has struck out, gathering their forces and letting their banners fly high in the air. They are on the march and they are out for blood. Reaching the borderlands of the Band of Killerz, they wasted no time, knowing that they could soon be discovered. They launched their attacks without delay and in a vicious, violent manner.

The target would be the BoK's pantheon 344. Softening blows were sent in, as the Baphomet Bannerman declared all-out war on BoK and their citizens. The besiegers, although facing stout defenders, were strong in force and could not be stopped. After a number of attacks, the defenders were ripe for the takedown and the main force of the Baphomet moved in, smashing through the gates and putting those that remained to the sword.

The victory, although won, was not meant to last. Baphoment's triumph was short-lived, as already the forces of the Band of Killerz were mobilizing and seeking to retake what was theirs. What followed was an ugly mess. Like sharks smelling blood in the water, a number of coalitions joined the fray, assaulting, taking and promptly losing pantheon 344 in rapid succession.

As can be seen from the above reports captured by the Chronicle, the fighting was almost non-stop as coalition after coalition moved in, attempting to catch other coalitions off guard and thus easy prey.

The walls around pantheon 344 began to quickly crumble as the attacks took their toll. The pantheon which once stood a proud and noble level 5 was quickly reduced to level 2 from the nonstop battles taking place around it.

The gates lay broken and battered, but in the end it was the Band of Killerz who finally retook the bastion of power, moving a division of their forces into place, expelling all opposition and eventually planting enough of a foothold to keep the stronghold in their power. 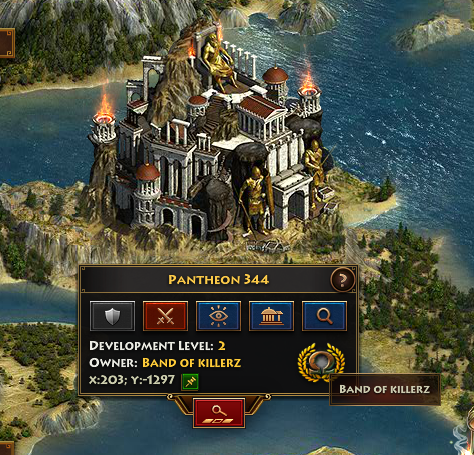 At this time of writing, the fighting around this pantheon has ceased and the Band of Killerz still holds what is theirs. The ground is still littered with bodies and blood still soaks the walls: yet is the fighting ever truly over? Or is another battle just over the horizon?