Death Inc Rises From The Ashes

Death Inc, thought broken and defeated, have risen from the ashes and are hell-bent on destroying those who did them wrong. The first member of the NWO alliance is targeted and defeated. Will the Death Inc stop here, or is this just the beginning?

One Coalition At A Time...

The talk of the realm for the past month has been the rise of the NWO alliance and the takedown of the Death Inc, the former top coalition on the realm. This defeat changed the shape and strategies of the entire realm and was one of the largest events in our realm's history.

Many assumed that this would be the end of Death Inc, that they would now drift into nothingness and fracture into a million pieces as their members fought internally. We at the Chronicle suggested otherwise and stated that this would not be the last we seen of this noble coalition. They would fight back and indeed they have.

A retaliation of epic proportions has taken place. The downtrodden Death Inc, licking their wounds and sent into hiding, has emerged madder than ever. Targeting one of the key members of the NWO alliance, the Thersites, they have struck out and invaded their lands.

The Thersites, not suspecting how quickly the Death Inc would muster their forces, were completely and utterly unprepared. The armies of the Death Inc, vast and numerous, marched through their scattered defenses and systematically laid siege to all of the Thersites’ Pantheons, their seats of power.

Attack after attack landed and the very foundation of the realm was shaken to its core. The Death Inc broke through steel and stone alike, cracking open the Thersite egg and putting their defenders to the sword.

A trail of smoke followed the armies of the Death Inc, as stronghold after stronghold fell to their tidal wave of forces. When the dust settled all laid battered and broken, the Death Inc had their revenge and were victorious, the Thersites had lost everything. 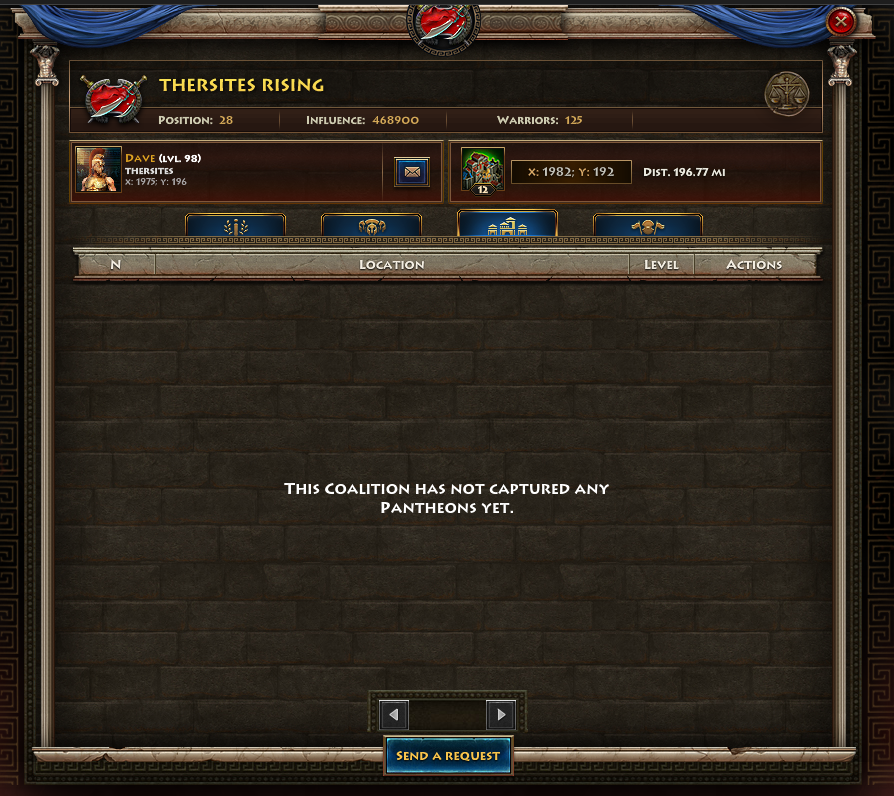 Taking to the public forums, as so many great lords are doing these days, Mercy Riiser of the Death Inc congratulated his members on the great victory and alluded to the fact that this would not be the last of their enemies to fall.

The post titled, "One Coalition At a Time" was a stark warning to all leagues that had wronged them, and was a sign of the dark times to come. 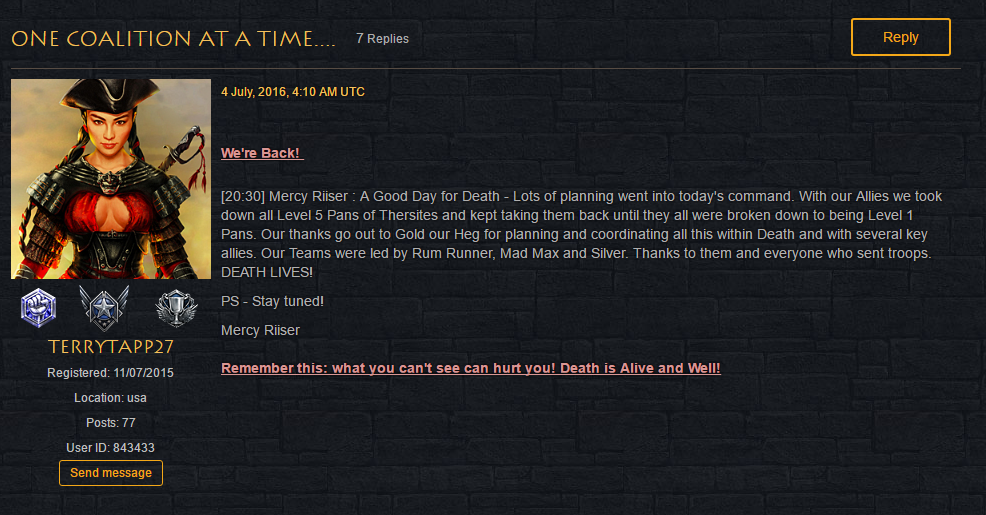 Taking the defeat well, one member of the Thersites responded to this announcement, praising the Death Inc's victories, but attempting to downplay them at the same time. This led to a series of messages, with members of various leagues arguing back and forth.

Now that the Death Inc have risen from the ashes and made it very, very clear what they intend on doing, it is only a matter of time before the entire realm once again erupts in complete and utter anarchy.

Many are fearful of what is to come and the instability that is now so common within our realm. Great battles are surely to come, the Death Inc has been scorned and their powerful armies will wash over the lands.

Can the NWO stop them, or will all their leagues fall on their swords, like the Thersites did? We shall just have to wait and see.