Powerful Coalitions Are Pitted Against Each Other

When will the madness end? Apparently not anytime soon. A second Pantheon Massacre washes over the realm and drenches its citizens in blood. Coalitions are pitted against one another in a violent and chaotic mess.

A Pantheon Massacre Reshapes the Realm

A tide of blood washes over the realm: The second Pantheon Massacre has come and gone, and as the tide recedes, a beach littered with bodies is all that remains. Yet, miraculously as before, they will rise again, returning to their families, with their memories the only scar left on their bodies.

Although this is a miracle indeed, we must venture back and recount the bloody mess that this realm just witnessed and watched unfold.

In another cruel joke played by the gods, man was pitted against man and rivals took this rare opportunity to strike out against their foes, vanquishing and unseating many contenders, knowing that 90% of their dead would rise again after the dust had settled.

All across the realm we saw massive battles, as many of the top coalitions faced direct challenges to their dominance and their pantheons.

Some chose to hide, battening down the hatches and calling all able-bodied defenders back to the homeland, while others strapped on their swords and marched out, seeking to claim victory in the name of their coalitions, banners flapping proudly in the wind as they went forth.

A sea of red flooded the map. It could not be missed. 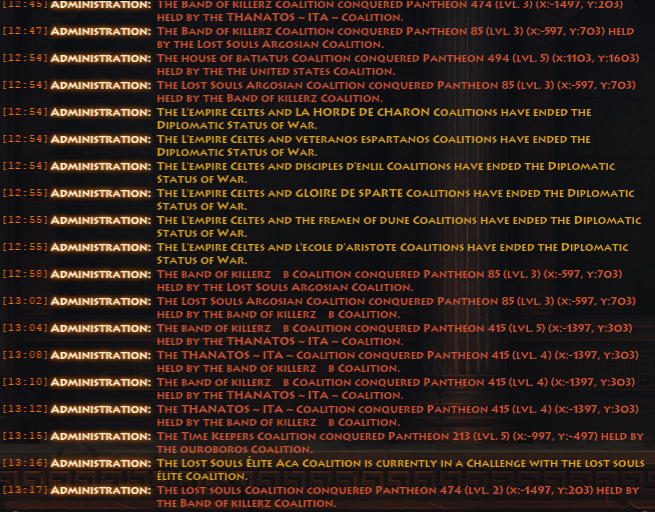 What is truly stunning is the fact that the above battles are just a fraction of what unfolded throughout the day. Many of the top coalitions went head to head against one another, resulting in the above spectacle.

The coalitions that went to war against one another are almost too numerous to mention, but some of the most notable took place between some of the most powerful names in the realm, such as the Terminators vs the Association, the HoB vs an array of foes and the Lost Souls vs the Band of Killers. 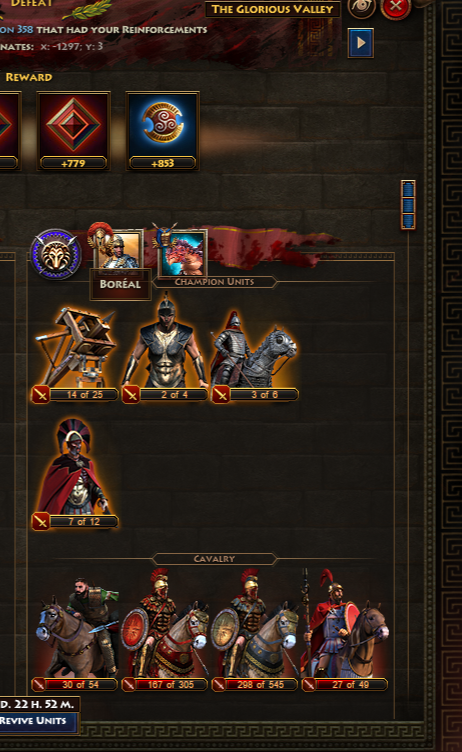 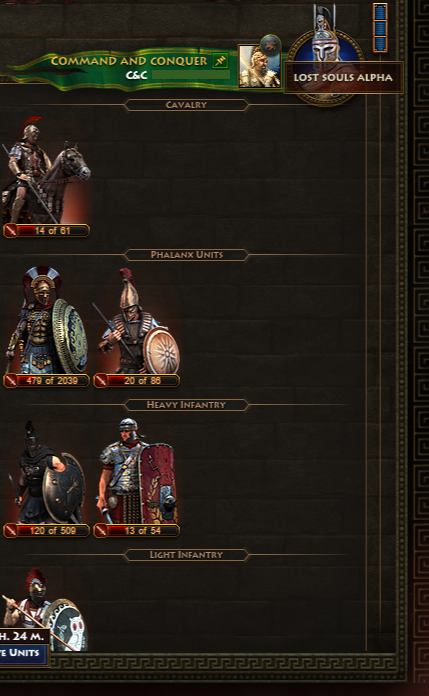 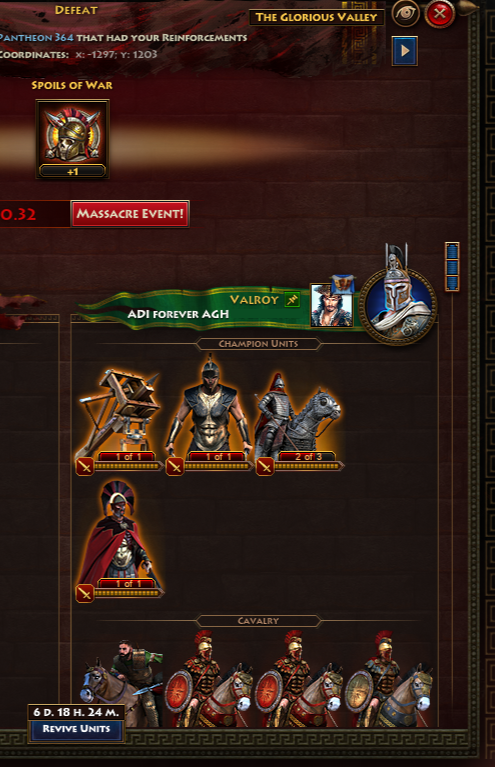 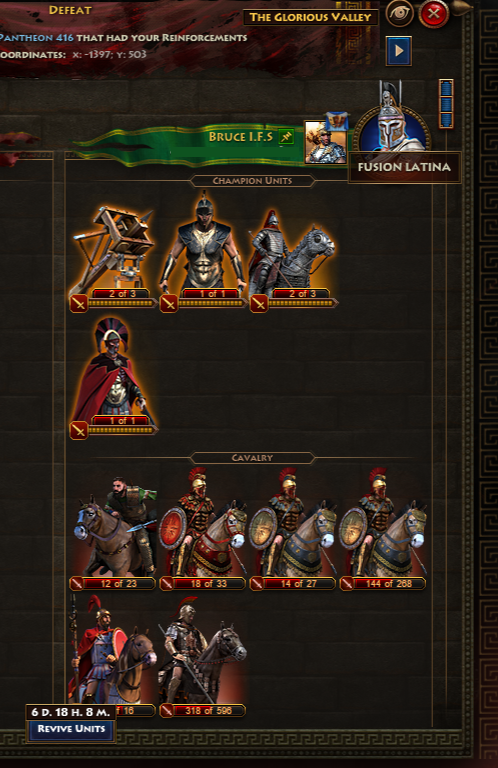 As the day grew dark, coalitions all over the realm discussed their strategies of choice. Do they seek to hold, do they go on the offensive, do they sit it out, or do they take part in the bloodbath? Many decisions were made, but in the end, few could abstain from the conflict that embroiled most of the realm whether they wanted to or not. 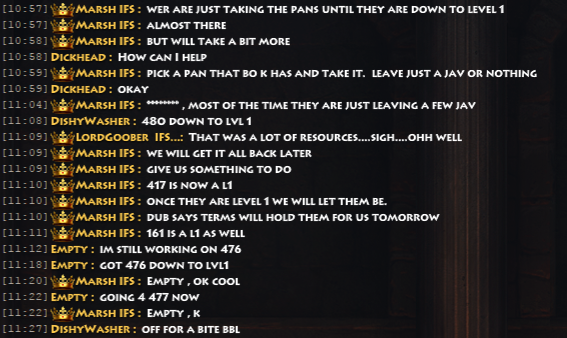 In the end, the gods stayed true to their words and raised those fallen in battle. They returned home, mentally scarred, but limb and body intact. The fighting that took place reshaped much of the map and toppled many from the their high ranking position in the charts.

Even though numerous coalitions fought valiantly, there could be only one winner and that was declared to be the Nordmann coalition, followed closely by the Band of Killerz and the House of Batiatus, all coalitions that saw themselves knee deep in blood as the Pantheon Massacre unfolded. 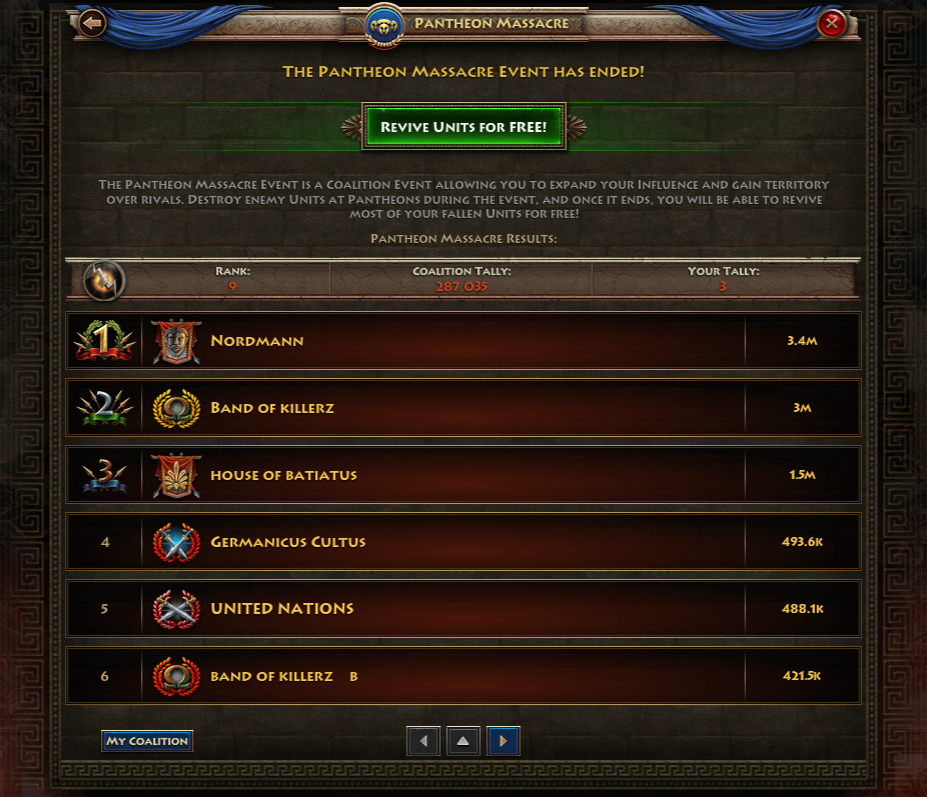 The madness has passed, but still the effects of this horrific event are long lasting the realm. Many coalitions have been displaced and many more were not able to regain what they lost. What the future holds is anyone’s guess.