Everything You Need To Know About Repositories 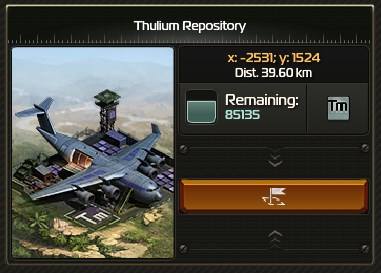 I seem to keep running into the same issues with bad plays at Repositories so I thought I might take some time to write some guidelines for fair play with this new game feature. If played properly, Repositories are much more lucrative than Depots.

1.    THEY ARE NOT DEPOTS. For the most part, Repositories are farms used by players who are currently online. Capturing an occupied Repository WILL cause repercussions.

2.    Resources are collected by your Defensive Units, who will return to your Base – releasing the Repository – as soon as they have collected all they can carry.

3.    Repositories appear at random. Once they are exhausted, new ones will appear.

HOW TO CAPTURE A REPOSITORY

Clicking the Capture button will allow you to dispatch Troops to capture and hold a Repository.

In order to capture it and collect Resources, you MUST send Defensive Units AND AT LEAST ONE OFFENSIVE UNIT.

When the Occupation lands, the Offensive Unit(s) will fight to capture the site. The Defensive Troops will just stand around watching. If the Occupation succeeds, your remaining Offense will return to your Bunker after the associated travel time and the Defensive Units will begin filling their pockets with the Resource. Once your Defense collects ALL IT CAN CARRY, they will abandon the Repository and return to your Bunker.

If the Repository is occupied when your Troops arrive, the Defensive Units take no part in the battle and will return to your Base unless your Offense is strong enough to overpower the other Commander’s Defense. NOTE, HOWEVER, that Troops returning to your Base from a failed attempt to Capture a Repository DO NOT report to your Bunker.

As I mentioned earlier, attempting to Capture an occupied Repository is not a smart play. The current owner is probably online and they will either retake it from you, or attack.
Collisions OFTEN happen when sending Troops to capture a vacant Repository!

It is best to send only a single Recon Operator to capture one. If your Troops arrive first, the single Unit will capture it. If someone gets there before you, the Capture will fail, you lose one Unit, the Defense comes home, and nobody gets upset.

Sending too much just annoys the other player. Pick another Repository and try again. If such a hit fails against YOUR recently acquired Repository, you can normally just ignore it, though you may want to reduce your Defense a little in case the other player decides to try again.

HOW MUCH DEFENSE SHOULD I SEND?

Stocking Repositories with large Defense to collect over a long period is not a smart plan unless you have a MEGA-ARMY. If you try, you are just asking for a stronger player to kill your Defense. Furthermore, if you do get hit, you lose ALL the Resources you built up over that time.  It is much better to send a small, disposable Defense and retake often. Heavy Snipers are a good compromise for this since they have a decent carrying capacity and a fairly minor cost.

This is especially true during PvP Tournaments when players will attack your Repository without a warning and/or without first Reconning. At this time, try to station an amount of Defence that will AT LEAST be replaced by the Tournament Rewards.
When dispatching Units to occupy a Repository, notice the handy summary information in the “Capture Repository” dialog. 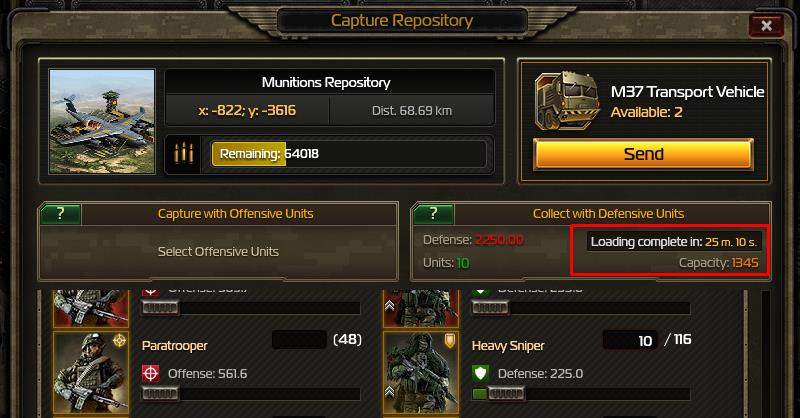 For example, if we were talking about a Thulium Repository, the value shown would be half of that for Munitions. You can think of it as Thulium being heavier; your Units can only carry half as much.

Unlike with Depots, Resources are actually collected from Repositories by the Defense Troops that you send to them. You can think of this as working the same way as raiding Bases. The more carrying capacity your Troops have, the more Resources you can collect from the Repository at one time. 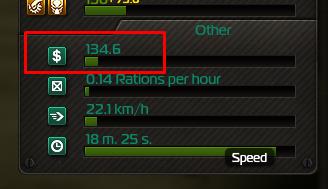 Once your Troops collect ALL they can carry, they will automatically return to your Base and end up in your Bunker with the Resources, and you will get a message indicating that this has happened.

You can also click on the “Collect” button at any time from the Positions/Repositories tab in the Command Headquarters. However, notice that this also returns all your Defense and releases the Repository.

Your Troops will also return with whatever they have collected once a Repository is exhausted.

Once you have captured a Repository, you can send more Defenses to it. Simply go to your Command Headquarters, the “Repositories & Excavation Sites” tab, find the Repository and click the Garrison arrow. Then click the “Send Reinforcements” button. Then select more Defense to send to the Repository. Unfortunately, the dialog shown here does not indicate the extra amount of Resource you will collect or how much longer it will take.

RECALLING PART OF YOUR DEFENSE FORCE

You may also recall part of your Defense force. You may wish to do this after a collision or after your Repository is reconned. Click on the Garrison button, as shown above, then click on the Recall button. A new dialog box will appear. 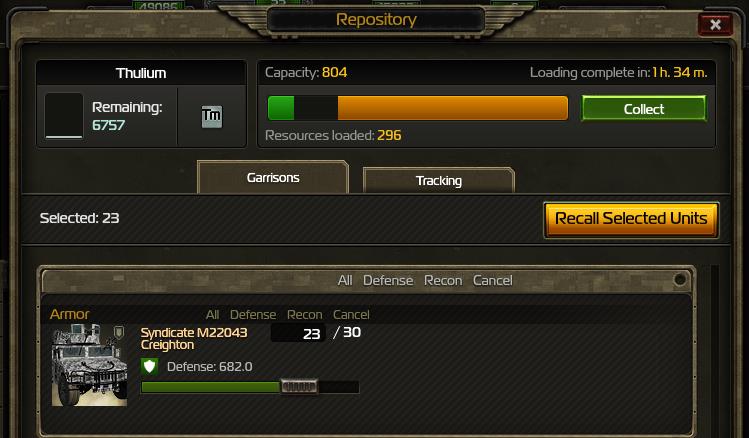 The orange part indicates how much carrying capacity you are losing. When the orange part crosses the green part, your remaining Defences can no longer collect Resources. Clicking “Recall” at (or beyond) this point will return ALL your Units and release the Repository.

During PvP events, Repositories are often a good source of points. However, randomly hitting Repositories that are held by only a few Units does NOT credit you many points and only serves to annoy the occupier. Sending a Recon mission first saves you this bother and prevents you from running into a heavily defended Repository.

However, be aware that since the Commander is probably online, they may withdraw (or fortify!) after they see the Recon report. As always, any Offensive action should be made with the assumption that the defender may take another, more drastic, retaliatory action against you.

I am not saying you cannot battle over them. Some people do love to muscle their way through this game. But as always, try to choose your battles wisely and count the costs versus the Rewards carefully.

You should evaluate whether the Resources you may collect are worth the equivalent Resources you might need to replace your Troops. Thulium and Diamond Repositories have a higher value in this regard. Losing huge amounts of Troops over a Ration Repository is totally counter-productive.

By default, you can hold up to three Repositories at a time. You can increase this number to four Repositories by completing the “Maximum Depots, Excavation Sites, and Repositories” Training Contract in the Training Centre for 30 Drill Instructors.

DECREASING THE TIME YOUR DEFENSE TAKES TO COLLECT THE RESOURCE

The Defense Troops take time to load any particular Resource from the Repository. By making them load faster you can theoretically gain more Resources per day or play period. You can do this by working on the Materiel Loading Contract. This Contract requires Resources AND IPs to complete up to Level 20. 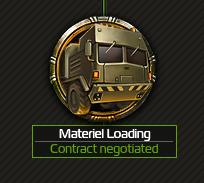 You should also remember that the quicker your Troops fill up, the sooner they get out of the Repository and the less chance there is of being attacked.

Be aware that quite a large number of players view Repositories as a waste of time and simply a target and source of Experience and PvP points. Such players will not see their value as a Resource supply and as such will continue to harass your captured sites. It is up to you to balance your losses with your gains.