Mr Black: Jeff, I’ve said it before and I’ll say it again: no man is an island! Good Commanders are inherently good delegators…come to think of it; Echo may well be one of those computer-geeks who can get this done for you. The word at the Merc Bar is that you’re a number cruncher too Commander. We may have to move you along to INT CELL to fix up that numbers stuff – they’re pretty useless up there, they are!

Jeff: I have to say that many games in this genre require you to break down the game into multiple components. You need to do this if you’re looking to make progress in the game. By planning ahead, you’re never left behind. It’s important to know precisely what resources are needed before you initiate a queue, or which of the units is best suited for the job at hand. I’ve often heard players calling for making all Combat Aviation or Armor – but I don’t roll like that. I have found lots of merit in using spreadsheets to plan your defences and achieve military supremacy. It really helps with counter-attacks and battle scenarios. Guessing alone is simply not an option for me. Consider for a moment putting max effort into decimating ZHG forces or even capturing mining complexes. These are great examples of how battle tactics and strategies can be put to maximum effect. You can’t simply send in waves of units when they’ll clearly be outmatched. That’s my take on it!

Mr Black: Great to hear that Commander! I’m feeling really pumped up now! Listening to this reminds me of my very first Ops-O – that fella was an energizer bunny. He would be up at all hours analysing those figures and COAs. I would warrant a guess that he never slept! What an exemplary officer he was. You are equally impressive Commander and I take my hat off to you.  As you are well aware Jeff, nobody actually knows where I am at this present moment. Believe it or not, I was in the forum the other day and I overheard some of those new recruits talking in hushed tones. They believe that you’re really Zeng-Shi – others believe you’re actually part of the Syndicate.  I think it’s high time you revealed the truth. I recall the time that Zhang Wei Chen from the Zheng Shi Holdings Group first came to me with a job offer…I never paid much attention to it. But later on, after careful thought and consideration, I conjured up an equally appealing counter offer. The CSO simply couldn’t refuse my offer – I guess I shouldn’t expect a birthday card in the mail…

Team, the verdict is in: Jeff’s one of the good guys. I never doubted you at any time Commander. What do you consider a great battle? Tell us what’s your most memorable combat experience was Jeff. We would love to know.

Jeff: Just a minute JB, I’m going through my viewee-tuees… good I’ve found it! One of the most memorable battles I’ve had the pleasure of being involved in was the day the Mining Complexes spawned. I checked my map and chose the complex closest to my base. I poured all my resources in and repelled all the ZHG filth after 2 gruelling waves of attacks. I missed getting to the server by just 15 seconds. That was an incredible fight! From a purely statistical standpoint, it was unbelievable. I’d never faced off like that before. Just then we were about to rid our neighborhood of some hothead FNG CEO. What a rush. Nowadays I check the map multiple times daily to scan for any such changes. You figure that a CEO can never be too far removed from what’s going on. I had my eye on 3 Mining Complexes, and each of them fell within short order. It was devastating to see how quickly it went down so close to our Complex core. Something was amiss. Two of the complexes were controlled by Zheng Shi but the 3rd complex was one we were friends with.  We decided to draw up battle plans. We swore officers in and at twilight we massed our forces and waited for the perfect moment. We delivered a massive attack on 3 fronts; each of them timed to perfection – synchronized to the second. We watched with satisfaction as the transports vanished into the horizon. We knew that victory was in the bag!

Soon we got reports from UAVs as the reconnaissance team flew overhead. ‘Hostile forces have been confirmed Sir!’  All it took was a nod to my fellow Officers and Generals; it was game on… ‘Big Brother to Victor Lima, we are clear of the enemy and RTB… give ‘em hell, sir!’ ‘We read you loud and clear Big Brother, 5 by 5’ Next, we shifted our focus to the War Clock on the wall.  ‘Gentleman, we have a rendezvous with history. Let’s not be late’ ‘Victor Lima actual to all squads; you are clear to engage. Over.’ That was the call that went to all battle stations when I released the button on the communications station. Soldiers were eager, as were their squad leaders who were calling for sit-reps. ‘Wilco, sir we are in the green and commencing our run now’ was the message relayed by a Thunderhead leader.

Within moments the fight was over. They never saw it coming. The frenetic activity in the enemy garrison resulted in them looking skyward as ordinance pummelled them with hellfire. It was a doomsday scene if ever I saw one. The earth shuddered, convulsed and exploded in fireballs of hellish fury. It was a bloodbath for the enemy and there were very few survivors. Those who survived the first wave of attacks were driven out and never returned.

Even when a new day dawned, plumes of smoke and a thick blanket of dust spiralled up to the heavens. It was a frightening scene. War had come and gone, but the defence troops proudly marched past their battle weary soldiers when they returned. It was just the beginning of what was sure to be a reciprocal attack on our very own forces. We had to make sure the enemy never returned – an undertaking that each and every one of us holds dear. To this day we still maintain control of those 2 Complexes; now that’s victory at all costs.

Mr Black: What a story – so beautifully recollected! Maneuver Theory precisely how it should be.  Commander Jeff Maginniss Incorporated his OODA Loop IOT to infiltrate the Enemy’s COA.  He then mobilized his forces and successfully delegated his authority, advanced to communicate with IOT seize, and held his ground. This is a perfect example of modern-day infantry tactics. The crème de la crème Commander!

On behalf of everyone in COMCEN I would like to take this opportunity to thank you for coming in to ZERO-ALPHA. To say that it has been a pleasure is an understatement! It has been inspirational and fantastic.

Your MMO analysis is what keeps you strong; more power to you. I have been briefed by all the die-hard Commanders in Zandia that your contribution to Soldiers Inc. is appreciated beyond belief.

Keep it up Commander! 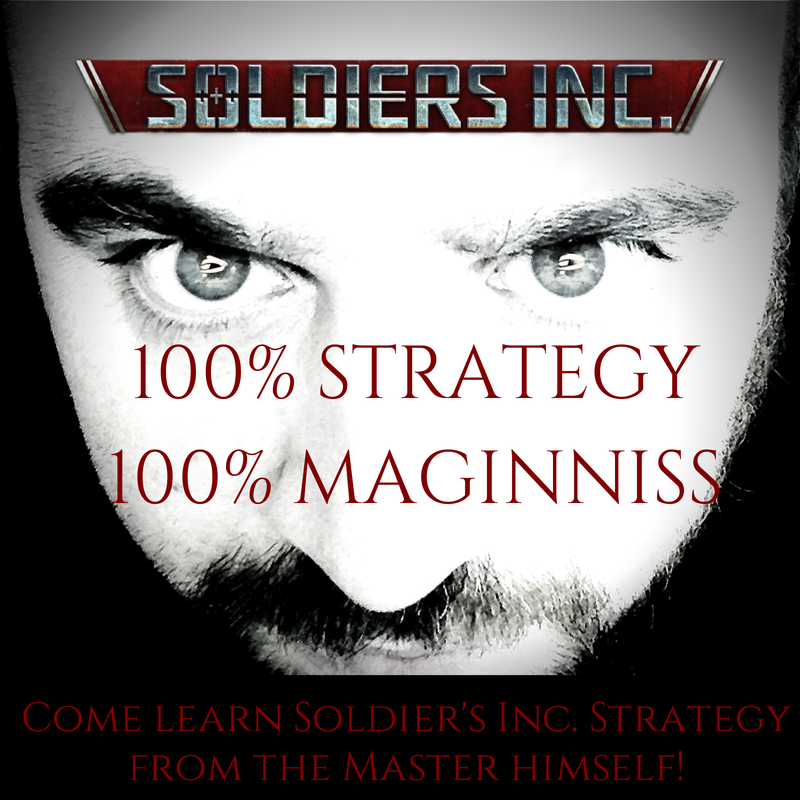