The Delicate Art of Raiding - Part 2

***Continuation of The Delicate Art of Raiding part 1***

Raiding Bases is easy; gathering 50,000 Resources a day is child’s play. Even gathering 100,000 a day is simple enough if you put in the time and effort. The HARDEST part of being a good raider is finding the Bases to raid.

I cannot stress this enough: to be a good raider you need to invest a considerable amount of time to build up a stable of high quality contacts that you can raid once every seven or eight days. Furthermore, it is important to routinely scan for more targets. Over time, they tend to get less productive as more players find them. This is a time consuming and cumbersome process, but it ultimately is worth every minute.

You should have AT LEAST ONE HUNDRED Raid targets in your stable. Why so many?

This is how it works: taking the maximum from each, you can raid almost 9.6 Bases a day once per week, and that is actually 67 Bases you can raid in a week. However, not all Bases are ready to be hit when you are ready to hit them. It is therefore prudent to include more Bases as a buffer. If you are using the eight or more day cycle you need more still.

So how do you find Bases to raid? Spend time on the map. Start at your Base and scroll around it. Go in circles around your Base looking for potentials. Step your circles up by quarter or half kilometer radii and keep going round. It is a painful experience, but it is worth the effort.

At first, you probably won’t find much. Do not be disheartened. When you are close to your Base, there will not be many potentials. You’ll notice that the further you go out, the longer it takes to go around your Base.  The more ground you cover, the more targets you will find. Stepping out to 50km or even 60km from your Base will provide you with many targets at an acceptable Raid distance.

What Should I Look for?

1.       Occupied Bases. Remember I said this is not Farmville. If you see an occupied Base, it is probably abandoned by the owner.

2.       Bases with no Combine. If the player is of any decent Level and is not in a Combine, they probably quit. BE VERY CAREFUL with Bases in Allied combines, or Bases on your Combines “stay clear of” list.

3.       Bases around your level. Don’t waste much time with low Level Bases. They won’t pay out much. There are some exceptions to this: you will find Level 40 Bases that are really well developed, and some Level 60s that suck. However, be very wary of that Level 90 guy on your block, HE WILL flatten you.

4.       Don’t just look, VISIT. Much information can be gleaned by actually taking a look inside a Base.

If the Base does not include some of the recently added Buildings, like the Field Hospital, or whatever Plarium may have given us after I wrote this, it is a dead giveaway that the player has quit.

You need to be familiar with what Level 20 drop zones and Resource Buildings look like. If they all look underdeveloped, the Base will not make a good Raid target.

If the Base is festooned with Walls and other Base “improvements”, the player obviously does not mind spending cash on the game, so unless the previous items indicate they have quit, TREAD CAREFULLY.

What Should I Do When I Find One?

1.       Send a Recon mission. Send ONE Drone, that’s it. If it is an abandoned Base, it will probably succeed and report there is nothing there but Resources or a light occupation force if held by a “farmer”. If the Resources reported on the Recon are poor, don’t dismiss the Base just yet. Someone else may have just raided it, and the report may be misleading.

If the Recon fails, or finds a large Defence, what you do next is up to you. Just remember, if it is Resources you are looking for, they are not worth it if you have to sustain considerable losses to get them. However, sometimes, if you know it is a dead Base, it can be beneficial in the long term to clear the remaining Defense. Personally, I wait a while as some other schmuck will often do it for me.

2.       ASK. This seems too simple to be true, but take the time to send the player a message asking if they are still playing. They may not answer, but if they do then you know you can exclude the Base. If they don’t and you raid them, then you at least have the argument that “I did ask first!” J

3.       Add as a Contact. When you get the Recon report, add the Base to your Contacts as a possible target and Recon it again tomorrow. Then raid it if the player has not responded and it looks ripe. If it is still not ripe tomorrow, repeat every day for a week or so. If it doesn’t get better, or the owner starts to complain, ditch it.

Always, always, always, recon before you raid. Remember I said Raid attempts are valuable? Sending a blind Raid at targets will always get you mixed results.

Make it a daily routine to send out a batch of Recons to the day’s potential targets when you first log in. Then wait for them to return and raid the best of the bunch. That way you can usually gather your maximum Resources every day. Remember to watch for 10 Raids available when you start your Recons though, and hit the first target with a good Recon report as soon as it arrives to restart the Raid clock as soon as possible.

What Kind and How Many Troops Should I Send?

There are two thoughts on this: send a lot or send as little as possible! Occasionally, you are going to run into someone’s Defense. Because of this, there is an argument to send a lot since the Defense you run into is usually light; however, sending a lot means you are limited to how many Raids you can dispatch at a time. In addition, you may run into a “WALL” (large Defense from a player or multiple players). Unless your definition of A LOT is huge, you may lose all of your Offense.

Personally, I prefer and always recommend the ‘send as little as possible’ method. While selecting the troops to send, watch the Capacity figure at the bottom of the form. It lies a little, but only send enough troops to bring back what you expect to take.

Since raiding is time consuming, you want to send fast troops. Mohawks are the most popular choice for raiding, though Pelicans are also good if you can afford them. However, ONLY use Pelicans on the targets you know are dead and undefended.

When you get to that point, it is also a good idea to invest your Drill Instructors into Mohawk Speed, since you spend a considerable amount of your time raiding.

If you are going to be a good raider, you MUST use some method to keep track of your targets, when you last hit them, etc. Some people use paper, others keep track in extensive spreadsheets, and the game itself has a couple of tools to help, namely the “Enemies“ dialog and my preferred choice, the Contacts list.

Paper is always a good standby option, and ultimately an Excel spreadsheet gives you the most data, but it is A LOT of tedious work disconnected from the game.
In game, although the “Enemies“ tab does give you some helpful information about when you last hit them and what you took, I find it hard to organize the information in a way that is easy to use.

Therefore, I recommend the Contacts list as a quick and easy method of keeping track of your targets. First of all, always set your Contacts list to sort by distance, so the closest Bases are at the top of the list. I’ll explain why later.

Each time I raid a Base, I use the buttons in the Raid report to delete and re-add the Contact to my list. I set this week’s icon and enter today’s date in ‘week.day’ format. I change the icon each week to make it a little easier to spot the ones I can’t raid any more in the current week. 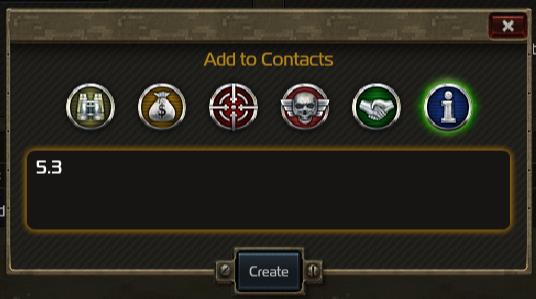 At the time of writing, it was week 5 day 3, and this week’s icon is the blue one. As you can see, I have already raided 3 of those Contacts this week. Today I can raid anything marked below 4.3 and take Resources, so there are three targets on that list I can send Recons to and potentially hit today.

Each morning, I start at the top of the list and scroll through all the pages, sending Recons to those that are ready. It takes minimal time and is easy to set up.

Remember to order your Contacts by distance. If you are using your Convoys to improve your take, you really don’t want your Raids to arrive at the same time. If you Recon your targets starting with the closest, scan through the reports from the bottom up, dispatching the required Raids. You will thus eliminate simultaneous hits, too.

Although not everyone will agree, the methods and ideology I described here have served me well ensuring that I am one of the top raiders in my Combine and in the game in general. A little time and effort, and you could be too.