The Seven Seas arrr on fire? It be time to call up the FireHouse! Today we have a very special Captain on board Anne’s ship. Lads ‘n’ lasses, let me introduce Captain James Reid - a scurvy pirate, an experienced sailor, a very diplomatic person, ‘n’ a true gentleman. He be equally good at forging Alliances, planning Wars, and smashing up his enemies. Enjoy! 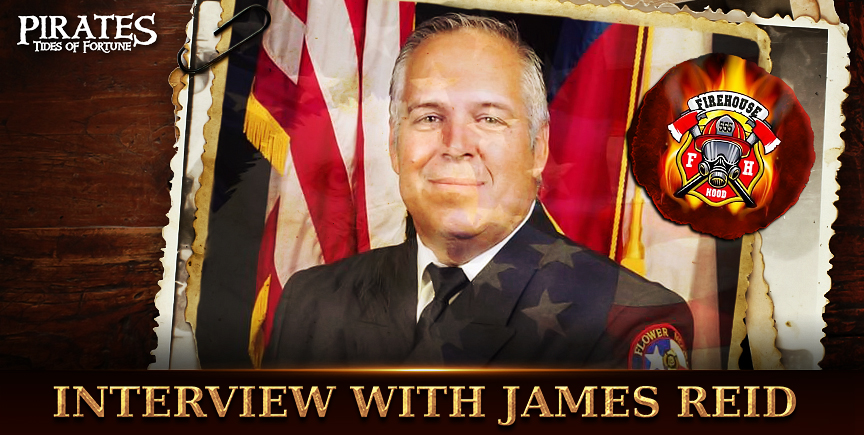 James Reid (J.R.): I am married to me best friend and awesome bride for over 15 years, and we have five children. I have worked as a firefighter for over 20 years and hold the rank of Captain for a department in Texas.

A.B.: Where did ye learn 'bout Pirates: Tides of Fortune?

J.R.: When I was recovering from an on duty injury, I found Pirates one day while looking at posts. I have always enjoyed strategy and war games, and this seemed to fit the bill. The online chess games were filled with weird people and not much challenge. So it was when I was in recovery that I got hooked on the game.

A.B.: So, me brave Pirate from Texas, have ye always been part of the FireHouse? If not, do ye remember yer first Brotherhood?

J. R.: I started the FireHouse after being part of another hood for a few months. I was asked to branch out and start a secondary hood, but it did not work out as planned. So I started FireHouse with two other players (who are still with me), and we began to quickly double our numbers. Over the following few months we grew to 75 players. Of those players, 52 are still here today. They remain a core part of our success.

A.B.: Several weeks ago, yer Brotherhood managed to earn a unique logo. Can ye tell me more about this? What was the most difficult Medal to achieve?

J.R.: The coveted Custom Flag… I first want to thank Leo Yampolski, Gabriel Rouchon, Henry Maisey, Ana Balint, Carlo Magno, Simon Pasturi, Mauri Peippo, and so many others who encouraged me or destroyed me so I would strive to become stronger. We wanted to earn this custom flag while holding on to the top rank in the game.

It was very important that we grow in Defense and Offense while maintaining our territory. We finally achieved our last downgrade for the gold medal hitting a Level 5 Presidio. The hardest Medal was the Dread Pirates (Missions Target) Medal. To place 3 Captains in the Top 10 became harder every week as the required score in Missions became higher and higher. I can remember placing in the top 10 a year back with less than 1/3 of the score it takes now. It is crazy how many Units were destroyed to achieve this medal.

J.R.: Ye cannot hang yer hat on only one of these methods. This game requires strategy and proper application of diplomacy. It also requires the intuition to know when to apply yer Offense and when to rely on yer Defense. An aggressive Brotherhood may go around and kill a bunch of Units and cause problems for unorganized teams… and a defensive hood will simply lay back and lull themselves to sleep and eventually lose all their players. But a team relying on Diplomacy, carrying a big stick, and having abundant forces to hold the line will survive.

J. R.: Gather Resources to build Units, and then work towards the team goal I have set for the week. As a Leader, I want to lead my Units into battles or towards a goal. I see so many Leaders leading from behind and putting their members into danger to protect themselves. This type of Leader disgusts me, and I do whatever I can to destroy them without hurting their players too much.

A.B.: Have ye ever met yer Brotherhood members in real life? If so, can ye tell us more about the meeting?

J.R.: I have not. We are very close (as close as Facebook allows) in the game. We know a lot about each other, and we try to be family oriented in spirit.

How to build a successful brotherhood

A.B.: Aye I remember that ye prefer diplomacy. Matey, give us some tips on how to build and run yer own Brotherhood successfully.

J.R.: As I mentioned earlier, I have always respected my players and asked that they always give respect to all players of the game. If a player breaks this rule, we do not need them in The FireHouse. They have every opportunity to make good on this primary rule when they break it, but I will not hesitate to toss a member out if they are disrespectful towards another player or disrespect the flag of an Ally. I believe that everyone has value whether ye are an enemy or a friend. I will do whatever I can to help out just about anyone in the game.

The motto of our team is to protect and serve those who are friends of The FireHouse. So if ye are an Ally, I pledge to honor yer flag and respect yer territory. I pledge to help ye out when I can and do whatever is needed to help ye succeed. I hope my Allies see that I am loyal and true to this pledge.

I have many friends in this game that know all they have to do is ask me and, if I can, I will do what it is that they request and ask for nothing in return. I want to mention the Leader of Swift Death, Gabriel Rouchon, who is a very special friend I have grown to admire as a true brother.

I have been very blessed to call both Gabe and Leo friends. I believe that the key to this game is reaching out to others and providing assistance and friendship when ye can. But the most important thing to building a successful team is surrounding yourself with players who believe in yer leadership and give their all for the team not because they have to but because they want to. I have been so blessed by so many players who give of themselves like this.

A.B.: Yer Brotherhood has an original name. What stands behind it?

J.R.: As mentioned, I have been a fireman since 1994. I believe in the core values of the fire service and believe I have brought those into the game. So it was natural for me to incorporate the fire service into the Brotherhood name. Since we spend most of our time in the firehouse while on duty and we live together there, I was honored to use this name for my Pirate brothers and sisters to hold as their banner.

A.B.: 1994 ...it was a great yearrr. I spent it in Port Royal drinking Rum and making plans for a brighter future on the Seven Seas. James, can ye give a piece of advice to Brotherhood Leaders on how to keep their Brotherhood Members’ morale high?

J.R.: Ye have to have a plan and ye have to respect their game. We do not allow anyone to be attacked without a full response from the team. I ask my players to not attack Brotherhood flags and to respect all players. In return, they can expect to receive the same treatment from members of our Brotherhood.

I try to make sure we are always doing something in the game to achieve a goal and give my team something to look forward to. We also continually communicate with each other, and as a player ye get out of this Brotherhood what ye invest in it.

A.B.: Captain, do not be a greedy Pirate! Share with us some tips on Raid tactics that be helpful to newbies.

J.R.: Never raid blindly. Have a plan for attacks and know yer enemies. I had a foolish player blindly attack me on a target the other day, and he lost most of his troops. I then went to his Haven and destroyed what he left out. I then destroyed a Presidio of his Brethren. I knew the team the player was a member of and knew they were a defensive team, so there was little risk to me.

I had another player scout me on a target, and then raid the target. I waited patiently to destroy him. I later caught about 4 million of his Offense sitting out in the open. My point is this: plan yer attacks, never act out of anger, and know yer enemy. Ye may win a battle or two, but the war goes on.

A.B.: Our interview is nearly at its end, but I have one last question. If ye could change one thing about Pirates, what would it be?

J.R.: The ability for someone to raid a Presidio but not having to do it with the diplomatic status “War”. I think that once ye raid a Presidio, a declaration of War is automatic from the aggressor, and the Presidio owner has the option of accepting or declining a War. I also think that there should be an accumulative Offensive bonus of 5% given to members of a team that hold a Presidio leading up to a bonus of ultimately 35%. This makes holding a Presidio a bonus even to those who hold none but attack all.

A.B.: Captain James, thank ye for keeping everyone entertained throughout the evening. Oh, it be almost midnight, the best time to attack those sleepy Spanish scoundrels! Fair winds and safe travels to ye... and see ye later on the Seven Seas!